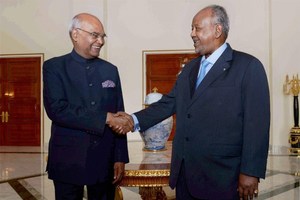 18 African countries will witness the opening of new Indian missions as a part of of an ongoing government outreach program to give a major boost to the India-Africa relations.

The 18 missions will be opened over a four-year period between 2018 to 2021. The geo stratigic move to start 18 new Indian missions in Africa is seen as an effort to strengthen ties between Asia’s third largest economy and the resource-rich continent where India’s strategic rival China has built a formidable presence in recent years.

The new missions have been planned to open in Burkina Faso, Cameroon, Cape Verde, Chad, Republic of the Congo, Djibouti, Equatorial Guinea, Eritrea, Guinea, Guinea Bissau, Liberia, Mauritania, Rwanda, Sao Tome and Principe, Sierra Leone, Somalia, Swaziland and Togo, thereby increasing the number of resident Indian missions in Africa from 29 to 47. Interestingly, China last year opened a naval base in Djibouti. It was also the first stop of Indian President Ram Nath Kovind during a two-nation tour of Djibouti and Ethiopia in October 2017.

“The decision will enhance India’s diplomatic outreach in the African continent and allow India to engage with Indian diaspora in African countries. The opening of new missions is also a step towards implementing the vision of enhanced co-operation and engagement with Africa,” the statement said.

India, once seen as a key influence in Africa in the 1960s-1980s supporting independence and decolonization movements on the continent has seen its prominence fade, supplanted mainly by China as the focus moved towards closer ties with the developed economies for investments and technology.

In a bid to revive its ties with Africa, India organised the India-Africa summits—the first of which was held in April 2008.

The second summit was held in 2011 in Addis Ababa and the third one in New Delhi in 2015 which saw the attendence of all 54 African countries including 41 at the level of heads of governments or states.