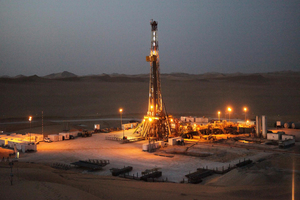 India’s total oil and gas production was 65.1 million metric tonnes of oil and oil equivalent in 2016 and the DGH’s plans are in lines with the government’s vision to reduce the country’s import dependency in oil and gas by 10% by 2022, he added.
India is the third largest consumer of oil in the world and the country’s total consumption of oil and oil equivalent was 257.8 MMT in 2016. The government has plans to increase production to more than 100 MMT of oil and oil equivalent by 2022.
Senior government officials were in Ahmedabad to conduct a workshop on OLAP which was attended by representatives of E&P companies, investors, and entrepreneurs.
The new policy aims to bring companies to tap 28 billion tonnes of unexplored hydrocarbon resources in the country. The policy paves way for unified licensing which means that companies can explore shale and coal-bed methane too in the blocks awarded to them.
“In the round 1 of OLAP, a total of 55 bidders selected blocks in promising basins in an area of about 60,000 sq. km by way of international competitive bidding,” Chakraborty said in an interaction on the sidelines of the event.
India’s natural gas production will see an addition of another 50-55 million cubic meters per day by 2022, he added.