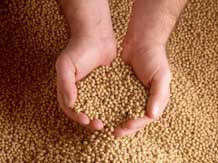 Exports in the year starting October 1 may exceed 4.1 million tonnes (mt) estimated for 2012-2013, said Rajesh Agrawal, a spokesman for the Indore-based Soybean Processors Association of India. That will be the highest sales since the 4.9 mt in 2007-2008. Output of soybeans, crushed into meal for animal feed and oil for cooking and biofuel, may climb to a record 13.5 mt in 2013-2014, the US Department of Agriculture's Foreign Agricultural Service said in a report September 7

Higher supplies of the meal may curb prices in Chicago, up 29 per cent from a 17-month low in August, as soybeans rallied on concerns dry weather will curb yields in the US Midwest, the largest growing region in the world's biggest producer.

In India, soybean futures are set for a fifth year of gain as demand for animal feed rose from buyers in Iran, Japan and Southeast Asia.

"Indian soybean meal continues to be in great demand from traditional buyers in Europe and Southeast Asia," Agrawal said in a phone interview on September 11. The nation has contracted to export about 850,000 tonnes from the new crop, with stockpiles of about 500,000 at the start of the season, he said.

Rupee impact
A weakening Indian rupee, down 13 per cent against the dollar this year, may also boost incentives for exporters to increase shipments. The currency is the worst performer among 24 major emerging economies in the past six months on concern that foreign capital outflows will accelerate as the US Federal Reserve prepares to reduce monetary stimulus.

"With a devalued currency, India can emerge as a significant exporter of corn, wheat and soya meal in the months ahead," Dorab Mistry, director at Godrej International Ltd, said in remarks prepared for a conference in Singapore Thursday.

While a weaker currency makes supplies attractive, buyers adjust their bids to factor in the exchange rate moves, said Agrawal. Exporters have contracted shipments between $440 a ton and $500 a ton free-on-board this month compared with the average of $571 in July, he said. India, which competes with top exporters Argentina and Brazil, has a freight advantage of $15 a tonne to $20 a tonne in South-East Asian markets, he said.

"There is big competition with South America," said Sandeep Bajoria, chief executive officer of Sunvin Group, who expects better margins for Indian soybean processors because of a weaker rupee. Still, the "downgrading of the soybean crop in the US has improved India's prospects."