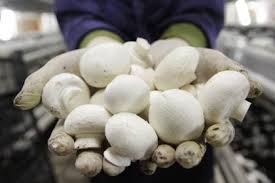 Mushroom farmers in Himachal Pradesh are looking forward to exporting their brand of hill-grown mushrooms, even as the state is emerging as a farmer-friendly hub and setting an example for farmers in other parts of the country to emulate.

Progressive and young farmers are planning to set up a cooperative to market and export button and other mushroom varieties that are produced in Himachal Pradesh.

A progressive farmer, Vikas Benal, said the cooperative would be constituted with the aim of creating better markets for small and marginal farmers, and added that mushrooms would be sold both in India and abroad.

"In our Samlaich village, every household produces mushrooms, and as you know, Solan is called India's "Mushroom City". It is becoming very popular and its production has also increased. I have been growing button mushrooms since 1990. Now, we are establishing a cooperative for marketing purposes, where we will market the mushroom we grow and package it like the way strawberries are packed. We will send it to Mumbai, Bangalore, Chennai and Kolkata, and, we also have plans to export it," he said.

"The problems faced by small and marginal farmers is that the crop they have is limited. So, we are trying to establish a cooperative to market the produce across India and abroad," he added.

Benal further said the consumption level of mushrooms in India is around 30 grams per capita whereas that of the world is around three kilograms.

"Mushroom farming is bio-conversion of agro waste or residue into health food. But in our country, we have a lot of agro waste and residue, 90 percent of which is wasted. We have to increase our consumption, as this will generate employment. The government is providing a lot of subsidies for this, and, I feel there is a lot of scope in mushroom growing. Mushroom growing in India is in its initial stages," he said.

Farmers from other parts of country are also getting training to innovate in mushroom farming.

"There are a lot of farmers who come to learn not only from Himachal, but across the country, and, even we go to European countries and learn the latest technology from there," he said.

Solan, Shimla, Kullu and Sirmour are the main mushroom cultivating districts in the state. Young farmers are learning from progressive mushroom producers. They also get good compost and mushroom spawn here at this farm.

"For our farm, we make fertilisers and seeds, and we also supply compost and seeds to other growers. So, in my farm, we grow approximately 1000 to 1500 kilograms everyday," he said.

"There are one or two big companies in Himachal Pradesh such as Himalaya International Limited, which export mushrooms, but there are many small and marginal farmers who grow seasonal mushrooms and some people make compost out of it or seed out of it. Some people buy the seed and compost for growing mushrooms. The climate of Himachal is very suitable for growing mushrooms. Farmers, who are idle during lean season, grow mushrooms and earn their living," he added.

Farmers from neighbouring states are learning and planning to make projects to utilise the paddy and straw of agriculture waste to make the environment safe and produce mushrooms in the region.

A progressive farmer from Punjab, Mohinder Singh Dusangh, said Himachal Pradesh is the best place to learn techniques associated with mushroom farming, and added that it is cheaper to produce mushrooms because of the availability of agro-waste.

"I have traveled from Kashmir to Kanyakumari to learn more about mushroom farming. And, I have also been to Thailand, Pakistan, England, America, Canada and Holland to get a better insight on this. We find Himachal the best for learning to grow mushroom, and also because we can get additional insight from the Mushroom Institute as well. Vikasji is using innovative methods to grow mushrooms, and the best part is, that even the seed is prepared. I feel it will be cheaper for us to produce mushrooms, because, we have a lot of agro wastes and there is no additional cost for that," he said.

"A lot of problems can be solved in this area. People usually burn the crop residues of rice or wheat. We want to stop this practice because this creates a lot of pollution," he added.

These farmers want to learn from progressive farmers here and also from the DMR (Directorate of Mushroom Research).

A young farmer, Ashu, said that he learnt mushroom cultivation from Vikas Benal and believes that mushroom farming can solve the problem of unemployment.