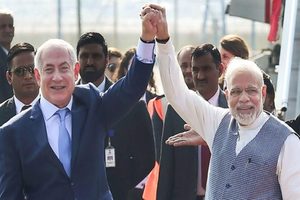 Nine agreements were signed by India and Israel, including in the areas of cybersecurity and oil and gas, following delegation-level talks headed by Benjamin Netanyahu and Prime Ministers Narendra Modi.

A memorandum of understanding (MoU) on cooperation in cybersecurity was signed along with a second MoU signed between the Ministry of Petroleum and Natural Gas and Israel`s Ministry of Energy in oil and gas sector.
A protocol between Israel and India on amendments to the air transport agreement was also signed. Another agreement was on film-co-production between India and Israel.
Ministry of AYUSH and the Centre for Integrative Complementary Medicine, The Central Council for Research in Homeopathy, Shaare Zedek Medical Centre of Israel, related to cooperation in the field of research in homoeopathic medicine signed a third MoU.
Another MoU between Indian Institute of Space Science and Technology (IIST) and the Technion- Israel Institute of Technology for cooperation in the field of space was signed.
A memorandum of intent was on Invest in Israel and Invest India. Indian Oil and Israel`s Phinergy Ltd signed a letter of intent for cooperation in the area of metal-air batteries.
For cooperation in the area of concentrated solar thermal technologies, a letter of intent was signed between Israel`s Yeda Research and Development Co Ltd and Indian Oil.
Earlier on Monday, the Israeli Prime Minister was accorded a ceremonial welcome at the Rashtrapati Bhavan here.
Netanyahu, accompanied by a 130-member business delegation, arrived on a six-day visit to India that will also see him going to Ahmadabad, Agra, and Mumbai.
This is the first Prime Ministerial visit from Israel to India in 15 years after that of Ariel Sharon in 2003.