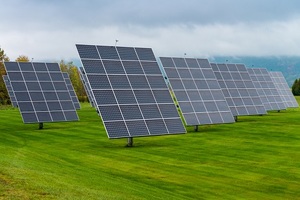 Power Minister R.K. Singh said, to finance solar projects, India will set up a $350 million fund, as the country steps up efforts to achieve its ambitious target of adding 175 gigawatts (GW) in renewable energy by 2022.

India will need at least $125 billion to fund a plan to increase the share of renewable power supply in the country’s grid by 2022, underlining the immense financing challenge ahead.
India, which receives twice as much sunshine as European nations, wants to make solar central to its renewable expansion. It is projected that renewable energy will make up to 40% of installed power capacity by 2030, compared to 18.2% at the end of 2017. “The country would achieve its target of 175 GW of installed renewable energy capacity well before 2020,” Singh said at an event organised by the International Solar Alliance (ISA) in Abu Dhabi. Installed renewable power capacity is currently about 60 GW, and India plans to complete the bidding process by the end of 2019/20 to add a further 115 GW of installed renewable energy capacity by 2022.
India’s Yes Bank Ltd. has committed to financing solar projects worth $5 billion, while state-run NTPC Ltd. will contribute $1 million to an ISA fund, the power ministry said in a statement.
India looking for foreign capital to account for a majority of its investments to meet its renewable energy target.
But industry experts said most of the financing for the country’s Renewables drive so far has come from domestic banks and such banks have to account for the lion’s share of new renewable investments in the future.