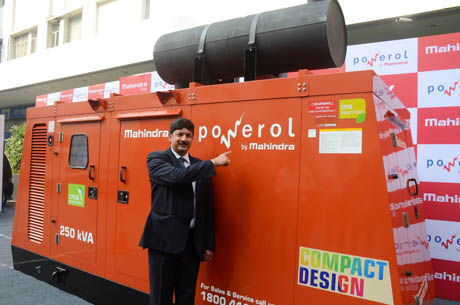 Mahindra Powerol, a subsidiary of Mahindra Group has revealed that they are in conversation with a number of global and domestic players over technology tie-ups to launch high power generator sets in 500 kVA over a two year period.

Mahindra Powerol is also hoping to raise their export revenue by 25 percent from its generator business in the next financial year, from the current 16 percent.
"We plan to roll out diesel generators in higher category of 500 kVA and above in the next two years. The industry is moving towards that segment.
Discussions are ongoing with a number of firms that are rolling out high powered generator sets.
"We are working on it. We are talking to many companies, both domestic and foreign for a tie up. It may be for the technology. But nothing has been finalised yet," Jain said.
No other details about the development of the product, investment or even research were shared. Jain did however speak about the company’s revenue. The company recorded Rs 1,250 crores in the last fiscal year, that number is expected to reach Rs 1,350 crore in this fiscal year.
In 2018-19 financial year, the company is looking to increase its exports revenue from generator sets to 25 per cent of the total turnover, he added.
The company launched their 250kVA and 320kVA diesel generators for the purpose of the North Eastern market that are priced between Rs 12.5 lakh and 16 lakh before GST.
Jain informed that the size of the Indian generator set market is 1,17,200 units with a value of Rs 6,394 crore as per last fiscal.
"We are a dominant player in the lower category generator set market. The North East market size is around 3,000 units and we enjoy 35-40 per cent share of the market," he added. TR MKJ