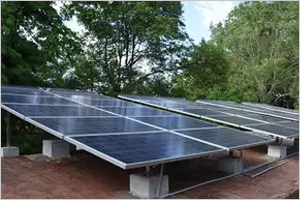 NEW DELHI: China-based Trina Solar, the world’s biggest solar panel maker, has put on hold its make-in-India plan to set up a 1,000 megawatt manufacturing unit in India because of low prices and absence of supportive policies but it will invest up to $500 million if it gets the right incentives.

“We have put on hold the plans to start production in India, because the prices are too low. This is not the right time to invest in solar as there are over capacities in the (global) market,” Gaurav Mathur, India sales head of Trina Solar, told ET.
Mathur said international players like Trina will be interested in incentives to set up manufacturing in India, and the government’s domestic manufacturing policy for solar, which is in the works, may provide some clarity on the plans. “We are willing to manufacture in India, provided we get some kind of benefit, specifically for solar industry. It is only a matter of time. We will set up (the manufacturing unit) provided we have the right kind of policy support from the government,” he said.
In 2015, Trina Solar bought land near Visakhapatnam to set up a manufacturing unit for solar cells and modules, with an estimated capacity of over 1 gigawatt. The project entailed a Skill India element, where 2,000-3,000 individuals would be trained and then eventually absorbed to work at the manufacturing unit.
The plant at Visakhapatnam would require an investment of $400-500 million, Mathur said. He added that India remains one of the most important markets for Trina, and they cannot ignore it even though it is a low selling price market. Trina Solar’s CEO Jifan Gao recently said the company might be re-considering its decision on a planned manufacturing unit in India, because prices there are “too low”. Industry experts say demand had firmed up in the Chinese market, influencing prices. India, on th ..
“India is an extremely price-sensitive market with prices paid by Indian developers amongst the lowest in the world,” said Vinay Rustagi, managing director of solar consultancy firm Bridge to India.