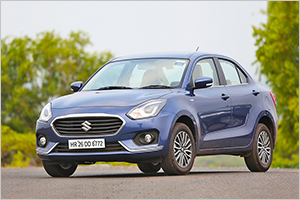 Maruti Suzuki is planning to increase the monthly production of all-new DZire sedan to 20,000 units. The sedan debuted in the Indian market in May and within four months of its launch, it breached the 1 Lakh sales milestone in October. And, if it was not enough, it toppled the Alto to become the country's best-selling vehicle for three consecutive months. All-new Maruti DZire petrol variants come in a price bracket of Rs. 5.43-8.37 Lakhs (Ex. Showroom, Delhi), while the diesel variants are priced in a domain of Rs. 6.44-9.39 Lakhs (Ex. Showroom, Delhi).

Mr. R.C. Bhargava, Chairman, Maruti Suzuki, in an interview with BloombergQuint, informed about this development. Due to the ever-growing demand, the general waiting period for Maruti DZire has gone upto 3.5-4 months across the dealerships. Hence, the company is increasing the monthly production to bridge the demand-supply gap. The DZire sedan was introduced in both petrol and diesel fuel trims in four grades: LXi, VXi, ZXi and ZXi+. The sedan is based on the Baleno's lightweight architecture, which makes it lighter in weight than its predecessor. As for the exterior styling, it is based on the next-gen Swift with new front grille and bumpers. The interior is sourced from the Baleno hatch with several upmarket and premium features as standard.
Mechanically, the all-new DZire retains the same set of petrol and diesel powertrains. The petrol variants are powered by the 1.2L 4-cylinder VVT engine which churns out maximum power of 81bhp and peak torque of 113Nm. On the other hand, the diesel variants draw their power from a 1.3L 4-cylinder DDiS 190 engine which generates top power of 74bhp and highest torque of 190Nm. Both the engines are on offer with a 5-speed manual transmission as standard, while a 5-speed AMT gearbox is also available with the Dzire lineup, barring the entry-level LXi grade. The petrol variants return a fuel economy of 22kmpl, while the diesel variants deliver a mileage of 28.40kmpl (Both ARAI Certified).