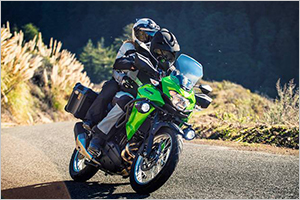 For those with road adventure streak, there's a new toy in town! India Kawasaki Motors (IKM) on Monday launched Kawasaki Versys-X 300 motorcycle, priced at Rs 4.60 lakh, which is the company's lowest range motorcycle - barring Kawasaki Ninja 300 - for the Indian market. Kawasaki's other touring motorcycles for India are Vercys 650 and Vercys 1,000. The latest model is the smallest-displacement motorcycle in the company's touring range. With the launch of Versys-X 300, the company aims to cater to those seeking highway cruising and easy riding on city roads.

The Versys-X 300 comes with 300 CC parallel liquid-cooled twin engine - similar to the one used in Kawasaki Ninja 300 - and can deliver 40PS of power at 11,500rpm and a peak torque of 26 Nm at 10,000 rpm. The engine, with six-speed transmission and assist and slipper clutch, boasts of smooth shifting while cruising on highway.
Kawasaki Versys-X 300 is equipped with a 41 mm travel telescopic forks at the front and a Uni-Trak gas-charged mono-shock at the rear, which justifies the company's adventurer theme. The motorcycle comes with 19-inch wheel up front shod in 100/90 rubber, while the rear gets a 17-inch rim wrapped in a 130/80 tyre, reported NDTV's car&bike, adding that other features of the Kawasaki's new range include versatile tube diamond frame, wide reach handlebars and a low-set seat aid in better handling and manoeuvrability.
With a kerb weight of 175 kg, Vercys 300 can store up to 17-litre fuel that can keep you on the wheels - without bothering to fill tank - for long. The company has introduced a new heat management technology in Versys-X 300, which, by promoting airflow, can help in stop engine from heating. The design, reported Times of India, can redirect the air smartly, which helps to keep parts -- like the tank and the frame -- cooler than before, for further increase in rider's comfort.
Versys-X 300 promises to cater to a new set of customers, and has no competitor in India in the current range. Royal Enfield Himalayan, which is priced at Rs 1.83 lakh, is the only near competitor of the bike. However, 2018 could see companies like BMW making an entry into the 300 CC range in India.
Kawasaki Motors launched the 2017 Kawasaki Ninja 1000, a BS-IV compliant vehicle, at Rs 9.98 lakh (ex-showroom, New Delhi) in July. The bike runs on the same 4-stroke, 4-cylinder, DOHC, 16-valve, liquid-cooled 1043 engine.  The engine churns out 140 bhp of peak power and 111 Nm of peak torque. It gets a new IMU with traction control and cornering ABS along with riding modes. Kawasaki has 13 dealerships across the country. The Ninja 1000 has rivals such as Suzuki GSX-S1000F and BMW R1200RS in the market.