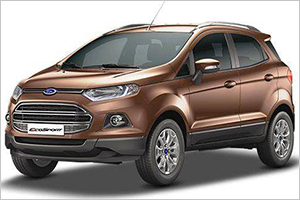 The rollout of the all new Ford EcoSport in November 2017 has catapulted the compact SUV to number four slot in the pecking order of top 10 utility vehicles (UV) during the month. Clocking the sales of 5,474 units during the month in the domestic market, the EcoSport climbed up two notches from the sixth position in the same month last year, when it sold 4,092 units.

It competes against the Tata Nexon, Maruti Vitara Brezza and Honda WR-V models. The company is also planning to export the new gen EcoSport to the US in
2018.
“The EcoSport 2017 is well-equipped and has had a major facelift after 2012 that makes it attractive to buyers. It had completed its cycle and this new launch is a mid-cycle advancement coming at the right time for Ford. It adds the novelty factor to the SUV,” said Gaurav Vangaal, senior automotive analyst, IHS Markits.
UVs have continued their domination in the passenger vehicle segment during November 2017, with a growth of 44.65 per cent at 77,824 units, compared to 53,803 units reported in November 2016. Production of UVs grew by 24.14 per cent at 96,953 units, against 78,101 units in November 2016.
The passenger vehicle market was up by 14.29 per cent during November, as new dispatches commenced at OEMs end after excess stock in the outlets had put the break during the festive period. Also some OEM facilities had been closed for a week’s maintenance during October.
Rural markets have also picked up after a lull that is giving a fillip to UV sales as many like the Mahindra Bolero and Scorpio are sold in this region and harnessed for both transporting passengers and loads.
Meanwhile, Maruti Suzuki India has found three of its utility vehicles in the top 10 list during the month under review. The Vitara Brezza compact SUV continues to rule the market and hold onto its pole position with sales of 14,458 units with the Hyundai Creta a distant second at 8,528 units.
Launched in March 2016, the Vitara Brezza, along with the premium Baleno hatchback, has been a runaway hit for the Japanese carmaker.
Rolling out with the diesel trim, the carmaker has plans to introduce the Vitara Brezza in a gasoline version as well that is expected to hit the market early next year or at Auto Expo 2018.
Vangaal attributes it to Maruti’s brand image, and the combination of a good product coming at the right price point. What is significant is that the carmaker had no major UVs in its kitty till 2011-12, and now three of its models have found space in the top 10 pecking order of UVs.
“Product differentiation across its UVs- the Vitara Brezza coming only in diesel option, no clear cut competitor for the Ertiga and a premium crossover S-Cross sold at the Nexa outlets, are driving the sales for Maruti Suzuki in this segment,” he added.
On the other hand, Shrikant Akolkar, AVP Research, Angel Broking, maintained that Maruti Suzuki started this fiscal on a positive note in its utility vehicle portfolio. It registered a growth of 30 per cent month-on-month in UV volumes, except in September when the growth was lagging at 8 per cent. Its UV segment then recovered in October at 30 per cent, with November surging ahead by 34 per cent. The year 2016-17 also marked a robust performance in this category at 18-19 per cent.
“Maruti Suzuki held its ground and double-digit growth in UVs due to its brand building exercise and new revamped dealerships both Nexa and Arena. While their other vehicle segments have been also doing well, they have made a mark in the UV segment, where they were traditionally not strong with the new features and cost competitive models,” Akolkar added.
Among competition, also significant is the upswing of the Tata Nexon compact SUV that saw its commercial launch in mid-September, making it to the top 10 UVs in that month just a few days after its rollout. In November, it is up at seventh slot with domestic sales of 4,163 units.
Analysts predict that early next year, the Nexon will overtake the Ford EcoSport and surge further ahead.
The Hyundai Creta, on the other hand, continues to hold on to its second slot for some time now and has a waiting period of 1.5-2 months.
At number three is pitted Toyota Kirloskar Motor’s Innova that along with the Fortuner SUV have been ringing in the numbers for TKM. It is up two notches from fifth slot in the same month last year.
Its earlier place is taken over by the Mahindra Bolero that slips one rung from fourth rank. The Bolero is popular in the rural markets, which are now beginning to see a revival after good monsoon.
The Maruti Suzuki Ertiga MPV, however, plummets to sixth rank in November 2017 from the third slot it occupied in the same month last year, with sales of 4,682 units (5413 units). The higher GST rate on hybrid vehicles could be one of the reasons for pulling down the mild-hybrid Ertiga sales.
Another SUV from the Mahindra stable, the Scorpio, have dropped one rung to eighth rank from the seventh slot it occupied in November 2016. It posted sales of 3,660 units during November 2017.
At ninth place comes the Honda WR-V, which has lost out to competitors in the race to the top slot. When it was launched in March this year, it was reigning amongst the top 5 UVs list. It has edged out the Toyota Fortuner from the ninth position that it held in November 2016.
Bringing up the rear is the Maruti Suzuki S-Cross at 3,363 units, down from eighth rank in the same month last year. Overall, it has been a bright year for the utility vehicle market that has been the major engine for growth for the PV segment. The new year 2018 augurs bright and with the automotive sector expected to stage a strong recovery in FY18, this should spur further uptick in the UV category.