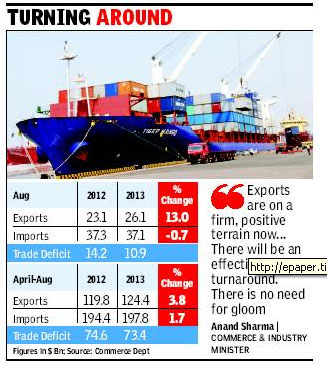 Fortune Reversal Seen As Economic Scenario Improves In The West

New Delhi: India’s exports climbed 13% to $26 billion in August and imports fell marginally as gold imports stalled, helping trim the trade deficit to just under $11 billion and provide much needed support to policymakers battling to shore up the rupee.
A widening trade deficit has been a key contributor to India’s record current account deficit. In recent months, lower demand in the US and Europe pulled down export demand, while imports kept rising due to high oil and gold inflows.

A spate of measures announced over the past few months have considerably slowed down shipments of the yellow metal. Trade deficit in August was the lowest since $10.3 billion in March as gold imports declined from $2.2 billion July to $650 million in August, commerce & industry minister Anand Sharma said at a press conference. “The fall in gold imports is not an aberration. It is going down consistently and I expect the trend to continue,” he added. However, crude petroleum imports rose nearly 18% to $151 billion in August as the rise in prices pushed up the bill.

Simultaneously, with the economic situation improving in the West, exports have started rising, prompting the government to talk of a reversal in fortunes. After all, this was the second straight month when the value of shipments out of the country rose at double-digit rates. “All sectors, with a significant share in the export basket, have shown positive growth, barring jewellery. Our concern was engineering, which has returned to positive territory,” commerce secretary S R Rao told reporters.

Despite the recovery in exports, exporters are demanding more sops. “For the last four months garment exports are growing at 11%. To maintain the momentum of growth it is important that manufacturing sector starts picking fast. This is an employment critical sector and government intervention is must to sustain the growth momentum and reach the target set by the government,” said A Sakthivel, who heads the Apparel Export Promotion Council.

Similarly, FIEO chief M Rafeeque Ahmed demanded according priority sector status to export credit, a demand that the commerce department has already placed before the finance ministry and RBI.

Sharma said the government is tracking trends on a quarterly basis and may extend a helping hand to the laggards. “We will take a considered view and make intervention to support those sectors, which are lagging behind, and that we shall do it after the review in October.” He, however, ruled out that the rupee depreciation offered significant boost to exporters, arguing that 45% of the input and raw material was imported into the country