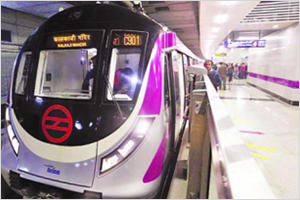 There is much fanfare about the start of Delhi Metro’s latest mass transit line — the Magenta line — that will connect the south-eastern corner of the metropolis with the south-western corner eventually. This Magenta line will dramatically reduce the load on existing Delhi Metro lines and reduce by three-quarters the time taken for a resident of Noida to reach South Delhi and when the line is complete, it will reduce by half the time taken between Noida to Gurgaon. And despite a recent incident, the Magenta Line of the Delhi Metro will introduce driverless trains onto the Delhi Metro system. A common sight in many systems across the world, this will be a first for India.
Crucially, the Magenta line will also be the first new line of the Delhi Metro to open since the Violet and Airport Express lines were inaugurated in 2010 and the project, which made waves in late December 2002 when it carried its first fare-paying passengers between Central Secretariat and Delhi University for the speed of its construction, has found itself struggling to meet deadlines as well as victim of politics between the Delhi Government and the Central Government made apparent by the decision to not invite Delhi Chief Minister Arvind Kejriwal to the inauguration of the new line, a marked difference from 2002 when Atal Bihari Vajpayee and Sheila Dikshit inaugurated and travelled on the first Metro together. The delays in the Metro project have impacted the city hard, with construction projects continuing for years beyond their scheduled completion dates and the lack of public transport connectivity having a negative impact on traffic congestion.
However, it is today impossible to imagine a Delhi without a Metro system. Sure there have been controversies, but the fact is that a signalling failure on one of the trunk Metro lines can give Delhi’s economy indigestion as workers get late. And despite the delays, Delhi Metro has set the template for new Metro systems across the country. In Jaipur and Kochi, intense competition to complete the lines led to record construction speeds. The huge demand for metro coaches has led to several large rolling stock companies setting up factories across India as well as home-grown expertise. Within a few years, once the third phase of the Delhi Metro is finally complete, Delhi will have one of the largest mass rapid transit systems in the world and the rush to complete such systems in India should make India an exporter of Metro construction and operation. However, it is vital that all Governments and policy-makers involved do not lose sight of the ball and let such important infrastructure projects become a victim of politics, because these projects are bigger than politics.