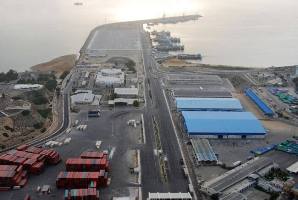 President Hassan Rouhani of Iran, officially opened the first phase of the Chabahar port and marked a the new strategic transit route between Iran, India and Afghanistan, bypassing Pakistan. Situated on Iran’s southern coast outside the Persian Gulf, it is easily accessible from India's western coast and is considered a gateway to central Asian countries creating golden opportunities for trade.

The first phase of the Chabahar port project also known as the Shahid Beheshti port  was inaugurated in the presence of representatives of several countries of the region including the Ministry of External Affairs, Minister of State for Shipping Pon Radhakrishnan who represented India at the ceremony.

The port is expected to ramp up trade between India, Afghanistan and Iran and counter Pakistan for denying transit access to New Delhi for trade with the two countries. The Indian officials have been working closely with Iranian and Afghan counterparts to create alternative, reliable access routes, bypassing Pakistan.

India sent its first consignment of wheat to Afghanistan by sea through the Chabahar port, about a month ago marking the opening of the new strategic transit route.

India with capital investment of USD 85.21 million and annual revenue expenditure of USD 22.95 million on a 10-year lease, is required to equip and operate two berths in the Chabahar Port Phase-I.