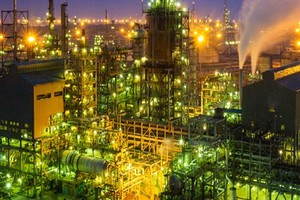 Oil refineries in India are planning to use petroleum coke for power generation and to produce syngas after the government banned the use of the heavily polluting fuel in and around the country capital, New Delhi.

The country's top refiner Indian Oil Corp and other refiners have invested billions of dollars to install delayed coker units to produce high-valued added products such as gasoline and liquefied petroleum gas.
Petcoke is produced as a byproduct, equivalent to 25-30 percent of a unit's capacity, which refiners sell to local industries. But after the Supreme Court imposed a ban on petcoke in New Delhi and three surrounding states from last month to fight pollution, refiners have to rethink what they do with the fuel.
Indian Oil supplied petcoke from some of its plants, mainly in northern India, to industries in Haryana, Rajasthan and Uttar Pradesh - the states where it is now banned. It is still producing petcoke but diverting it to regions where it is not banned, its chairman Sanjiv Singh said on Tuesday.
Indian Oil Corp is evaluating building a 2 million tonne per annum (mtpa) petcoke gasifier costing 150 billion-200 billion rupees ($2.3 bln-$3.1 bln) at its 300,000-barrel per day (bpd) Paradip refinery in eastern India, its chairman said.
The gas made from petcoke can be used internally in refineries and at petrochemical plants.
"Normally petcoke gasifiers are large and capital intensive. A possibility is that we can build one gasifier for two to three refineries," Singh said. IOC operates 11 refineries in India.
Reliance Industries, the owner of the world's biggest oil refining complex, has set up petcoke gasifiers to produce gas for internal needs using 6.5 mtpa petcoke produced at its two refineries.
Annual demand in India for petcoke, which emits harmful sulphur oxides and carbon dioxide when burned, has doubled to 27 million tonnes in the past four years as it is cheaper and more energy efficient than coal.
Bharat Petroleum Corp utilizes petcoke produced at its Bina refinery in central India to generate power.
HPCL-Mittal Energy (HMEL) is converting a captive power plant at its 180,000 bpd Bathinda refinery to use petcoke. "We have installed various units including scrubber (units) to curb emissions," a company official said.
HMEL's chief executive declined to comment.
Oil company officials hope that the Supreme Court will allow the use of petcoke in the cement industry, where it is not used as a fuel. India's environment ministry also favours an exemption for the cement industry from the ban.
Hindustan Petroleum Corp will use petcoke produced at its planned 180,000-bpd Rajasthan refinery for power generation, its chairman M. K. Surana said.
Its Vizag refinery in southern India, which it is expanding, produces no petcoke at all.
"Now we are going for a technology where there is no petcoke production, basically the bottom residue gets converted into a liquid," Surana said.