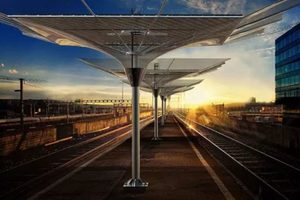 Necessity is the mother of invention, they say. India is in desperate need of two things, clean power and clean water.

Entrepreneurs Priya Vakil and Samit Choksi have created a new product that addresses both needs. It is a stainless steel structure that is for all intents and purposes an upside-down umbrella. It filters rainwater to make drinking water and is lined with solar panels to generate electricity.

ThinkPhi which is what they named their company is located in Mumbai and was launched in 2015. Today, over 200 of its innovative structures are in use in many parts of the country. Known as an Ulta Chaata in India, the smallest unit — the 1080 — weighs 220 pounds and costs about $1500. It is 4 meters square and can filter 85,000 liters of water during the rainy season or provide 1.5 kW of electricity on a sunny day.
“Our latest version the model 1080XL is a superstructure which can generate over 40kW of solar power on a single charge and filter over 1 million liters of rainwater,” says Choksi. “This can supply energy for large infrastructure projects,” he adds. Although India gets plenty of rain, most of it goes straight into the ground or into streams and needs purification before it is suitable for human consumption.
Inside is a central operating system called the “phi-box,” which can control several units. Sensors built in to each unit “collect data from the environment and alert the building warden or customer via an app in case of any system maintenance,” Choksi tells the Economic Times of India. “[The phi-box] also calculates the amount of resources collected and measures water purity. Additionally, users can also register complaints or get help in case they run into any technical issues,” he adds.
“Starting at about a lakh, these devices may seem expensive at first, but the amount of water and energy generated will ensure that users get their returns soon enough,” Choksi says. The company has already sold 200 units and expects that number to increase to 500 by the end of 2017. “Each product is designed keeping the highest quality standards in mind, allowing us to provide a long term warranty,” he adds. Each comes with a 15-year warranty.
Choksi believes “clean tech” means more than just renewable energy. It also applies to products that focus on air quality and conservation in general. Despite the enormous amount of interest in renewable energy in India, Choksi says very little innovation is taking place behind the scenes.
“For India to be known as a clean tech innovator, we need to support companies that do not follow the herd,” he says. “So innovators have to think outside the box to include these other areas and focus on solutions which use smart technology to build a sustainable future.” His focus now is on consumer waste management.
“We want to manufacture smart bins that tackle home waste generation, but at this point we want to focus on building a sustainable business out of our existing product line,” he says. “I would like to set a target of being profitable by March 2018. This will be a great success story too – one that took a conventional product, added good design and smart technology, created a market and built a sustainable business around it. We want to replicate that story for all our products going forward.”