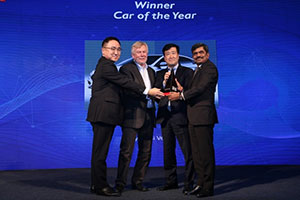 News18.com, one of India’s top breaking news websites, held The Tech and Auto Awards in New Delhi amongst the presence of industry experts. The awards ceremony celebrated and honoured Technology and Automotive products and innovations that have made a mark in their respective sectors.

Hyundai Verna, which was launched this year with a bunch of updates, won the ‘Car of the Year’ award along with the ‘Sedan of the Year’ award. The mid-size sedan not only won the hearts of the people with over 29000 audience votes, it also got a near perfect score from the highly valued jury, who liked the overall design, cabin and features of the car.
Hyundai Verna won the award among the highly competitive list of nominations, including Tata Nexon, Jeep Compass and Maruti Suzuki Dzire. The price of the sedan starts at Rs 8 lakhs and goes upto Rs 12.88 lakhs (all prices ex-showroom, Delhi). The sedan is available in 1.6 litre petrol and diesel engine options as well.
Manish Maheshwari, CEO, Network18 Digital said, “At News18. Com, it is our constant endeavor to connect with our consumers through different channels and make a difference to their lives by offering content that is most relevant to them. Tech and Auto Awards is one such platform to bring together the two most important sectors where today's consumer spends the most time on. These awards have established themselves as the benchmark for facilitating Indian consumers in choosing the best technology and automobiles by making the informed choice."
Shri. Ravi Shankar Prasad, Cabinet Minister, Law and Justice and Ministry of Information Technology, adorned the awards night as the Chief Guest. The highlight of the evening was the Key Note speech by Mr. Larry Paulson, Vice President and President, Qualcomm India and a special video address by Shri. Nitin Gadkari, Union Minister of Road Transport & Highways and Shipping.