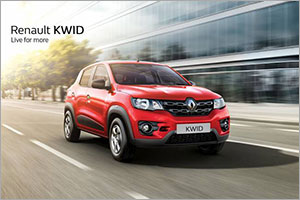 An all-electric Kwid could advance toward the Indian market if all runs well with its launch in the Chinese market, Renault CEO Carlos Ghosn said in an interview.

“Once it (Kwid electric) works in China, there's no reason you're not going to export the car to India, to Brazil, to the Middle East,” said Ghosn.

Ghosn claimed to have also driven a model of the ‘very well engineered and low-cost car’ showing that the vehicle is in advanced stages of development before going into full-fledged production sometime later next year or in 2019.

As per Ghosn’s own admission the electric Kwid may not be produced within the country but instead be imported from China at least initially before a more concrete eco system suitable for electric vehicle production takes shape in India.

The Kwid is one of the five entry level hatchbacks on sale in India and is the best-selling Renault model in the country contributing more than half of the company’s sales. The five seater Kwid is the second highest selling entry hatchback after the Maruti Suzuki Alto.

Thanks to an aggressive push by the government China has emerged as the biggest electric vehicle market and also as the production hub of electric vehicles for all global manufacturers.

As per data available, sales of electric and hybrid vehicles in China jumped 53 percent last year to 507,000 units as compared to 2015. However like India China, too, has a huge demand for cheap electric cars having a practical range.

In India only Mahindra & Mahindra commercially makes electric cars such as the e2o for the retail market but competitor Tata Motors has promised to enter the segment too with electric versions of the Tigor and Tiago.

Interestingly, Renault’s sister company Nissan appeared as one of the bidders (beside Tata Motors and Mahindra & Mahindra) for the government’s order for providing 10,000 fully electric cars to be used by government-owned companies. However, the Japanese company could not meet the specific requirement for the bid.