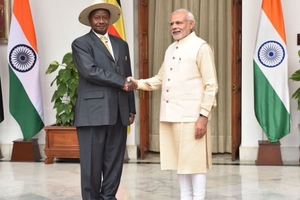 Kampala, Uganda | President Yoweri Museveni while addressing a business conference of the Confederation of Indian Industry (CII)-Exim Bank Regional Conclave on India-East Africa Partners in Development at Speke Resort, Munyonyo on Monday, advised prospective investors to target investing in areas of agro-processing and mining minerals like phosphates, in Uganda .  The President speaking to delegations from India, Tanzania, the United Kingdom, Uganda and other partner countries said that because of the historical background that India had with Africa, there is very big potential for cooperation in businesses. The expansive market between India and Africa, he added, was a crucial factor that would be advantageous to both parties if utilized fully. “India and Africa can complement each other very well. We have a historical link of using the English language which we should take advantage of. The Indians have been here for the last 130 years.” he said.

Museveni said that Uganda imports of Indian products exceeded the Ugandan exports to India, and therefore, encouraged India to buy more of Uganda’s products. He emphasized the need for infrastructure development to easily link producers and consumers, to help lower the cost of doing business in an economy. He further noted that human resource, good security and macro- economic stability are essential to ensure smooth operations of businesses.

The Minister of Finance and Economic Planning, Matia Kasaija, reported that India tops the licensed investments in Uganda. He revealed that there are several investment opportunities in Uganda especially agriculture, agro-processing business, roads, rail and water transport etc. He also added that the Government of Uganda has identified these sectors with the goal of facilitating production. He asked the Indian business community to invest in Uganda to tap into the country’s wide range of minerals that require processing.

The Secretary of Commerce for India, Rita Teaotia, spoke of the strong partnership that India has with African countries, especially Uganda. She noted that the size of the delegation of India at the Munyonyo Conference, is a strong sign of the economic interest and affinity that India has towards Africa. She added that India is ready to make sure that the business partnerships the Sub-continent has with Africa are fully realized.