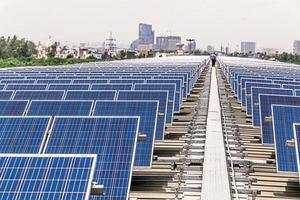 India plans on setting up a 20 GW of solar power capacity it will be one of the world’s largest solar tender. This is being done in an attempt to spur domestic manufacturing of solar power equipment.

The project will help decrease the country’s solar power tariffs and provide a boost to the National Democratic Alliance (NDA) government’s Make in India plans.
Most solar power developers in India have been importing solar modules and equipment from countries such as China, which resulted in India's domestic manufacturers accounting for only around 10% of the market despite India having an ambitious 175GW clean energy target by 2022.
India has plans to boost solar equipment manufacturing which could lead to reduction in tariffs
The ministry of new and renewable energy (MNRE) plans to award these contracts to developers who will quote the lowest price at which they will sell electricity in the auction process for the grid-linked capacity. The projects are expected to be built in phases.
“The tender is being conceptualized by MNRE. These contracts will be awarded in one go to developers to construct projects in phases. Once people see the emergence of such projects and then manufacturing can kick in,” said a second person aware of the development.
Solar tariffs dropped to a new low of Rs2.44 per kilowatt hour (kWh) in May and firmed up to Rs2.65 per kWh in an auction by the Gujarat government in September. These tariff levels are lower than the average rate of power generated by coal-fuelled projects of India’s largest power generation utility, NTPC Ltd.
Minister for power and renewable energy, Raj Kumar Singh, has stated that 20GW each of solar and wind power contracts will be auctioned to help India achieve its ambitious clean energy target. “It is a good idea but will face the challenges of who will sign the power purchase agreements of this quantum? That has to be planned,” said the second person cited earlier.
The solar industry welcomed the move; firms are hoping problems associated with the sector are adequately addressed.