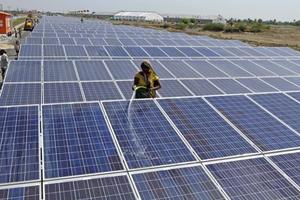 Announcement for a 30-megawatt solar facility in India that will meet the yearly energy needs of more than 14,000 homes has been commissioned.

The plant will be developed by Tata Power Renewable Energy Ltd and will be situated in Palaswade, Maharashtra.
The parent firm said the new site was using domestically-produced crystalline silicon photovoltaic (PV) modules. Photovoltaic refers to a way of directly converting light from the sun into electricity.
The facility will generate more than 62 million kilowatt hours per year and will cover more than 140 acres.
Rahul Shah, TPREL chief executive said that the commissioning of the facility marked a milestone in the drive to "grow our portfolio of clean and renewable energy generation."
In October, a renewables market analysis and forecast from the International Energy Agency (IEA) stated that new solar photovoltaic capacity increased by 50 percent in 2016.
Additions of solar PV grew faster than any other fuel and surpassed the net growth in coal, the IEA added.
IEA Executive Director Fatih Birol said "What we are witnessing is the birth of a new era in solar PV,"