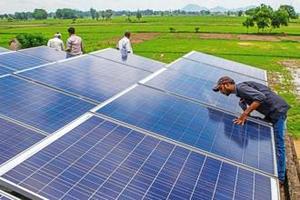 Yes Bank is hired by SkyPower Ltd to sell a stake in its solar power projects in India.

The move by the company to sell a stake in its India portfolio is representative of the investment thesis adopted by foreign developers in India’s clean energy space. With financing at the lowest cost becoming key to success, given record low wind and solar power tariffs, the deal-making activity in the Indian clean energy space has gathered pace.
A pipeline of over 25 gigawatts (GW) has been built, assembled and acquired worldwide by the Toronto based company, of which 9GW is in the form of bilateral agreements to be built in Africa, West Asia, and South-East Asia over the next five years. Majority stake in SkyPower is owned by US-based infrastructure and real estate investment firm CIM Group.
Ongoing deals include Finland’s state-controlled power utility Fortum OYJ hiring Barclays Bank to sell a stake in its operational solar power projects in India and Subhash Chandra’s Essel Infraprojects Ltd mandating Investec to find a buyer for its solar business and Equis Energy is also confirming its sell-off plan, as part of the strategic review of its Asian renewable energy portfolio.
SkyPower received two solar projects of 350MW in Madhya Pradesh and Telangana this year. The firm also announced about its agreement with Chinese battery technology firm BYD Co. Ltd to jointly bid for upcoming solar project and energy storage tenders in India.
The director of international and institutional relations at SkyPower, Shamini Selvaratnam, , said, “As you know SkyPower is a private company in a highly competitive industry and does not discuss or disclose project details beyond what is made publicly available. This has been the operating policy since the company was founded.”
SkyPower has agreed to over 30 utility-scale solar power purchase agreements (PPA) and contracts with governments and utilities from across the world. These PPAs amount to $80 billion worth of long-term renewable energy sales, according to the company.