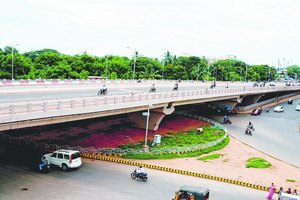 The rural development department has been directed by the Odisha government to begin construction work on at least 200 bridges, including the 145 projects sanctioned under Biju Setu Yojana (BSY), by the end of this fiscal, official sources said.

A P Padhi, Chief Secretary asked the engineers of the department to wrap up the tender process by November 30 and begin fieldwork in December.
Padhi also asked the officials to ensure the use of quality material for bridge construction and to enforce safety guidelines.
B P Sethi, The secretary of the department, stated that a mechanism has been put in place for quality control checks.
"We will carry out inspections during procurement of raw material when the work is in progress and also when the maintenance work is carried out," Sethi said.
Over the last three years the department has constructed 500 bridges at a cost of Rs 1069 crore, he added.