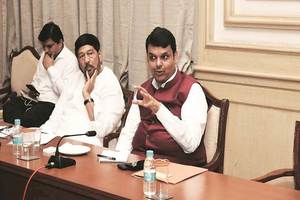 Maharashtra is a major force of the Indian economy today. The state is an attractive proposition for foreign investors and is in a good place to be a global financial, commercial and cultural hub for future design, innovation, and creativity-led entrepreneurship opportunities.

During PM Narendra Modi’s recent trip to Germany, he was quoted saying ‘we are meant for each other’on India’s bilateral relations with Germany. Presenting India as a strong and dependable partner to Germany.
Working together with Germany is expected to provide a further boost to India’s progress and help make India an industrialized economy.
The economic importance of Maharashtra to India directly mirrors that of Germany to the EU. Both regions have a well developed infrastructure in the auto, electronics, and food processing sectors. And are recognized leaders in the innovation and technology.
INNOVATION
Innovation remains synonymous with the German way of business. Innovation is of prime importance and is rooted its institutions. Maharashtra too has a similar business environment to nurture a similar culture with its established education hubs, the presence of industrial clusters and availability of infrastructure and funding.
The construction of the Samruddhi Corridor, the Mumbai-Nagpur Expressway is expected to further hasten the economic growth of the 12 districts that the expressway will cover and also another 12 districts which fall under its influence.
Mumbai also has the potential to develop into ‘super innovative hub’ of India with everything in place to make it the nation’s biggest fintech hub.
INFRASTRUCTURE
Maharashtra occupies an excellent position among other states with regard to overall infrastructure. But there are still measures to be taken to take Maharashtra to the next level and meet international standards. The development of the Aurangabad Industrial City and a green-field smart industrial city are also steps in the right direction.
The up gradation of existing commercial hubs to meet German standards will further improve its efficacy. For instance, the Bandra Kurla Complex which covers all smart mobility, digital economy, smart energy utilities and infrastructure solutions holds the potential to become the ‘smartest business hub’ of India.
CULTURE AND TOURISM
Maharashtra’s cultural might is credited to its traditions. The state has managed to preserve its rich traditions over the years and it now acts an important arm in its tourism industry.
Through a strong hub-spoke model with cities with sizeable tourist influx as hubs and sites as nodes, economic activity can be ignited in surrounding regions. Faster connectivity can be achieved with the integration of Shirdhi with the new Samruddhi Corridor to maximize the benefits of the Greenfield airport. This, in turn, will enable the eco-conscious development of the pilgrimage destination of Deekshabhoomi, which is home to Buddhist caves and other attractions of national importance.
SUSTAINABILITY
India is projected to have a working-age population of a whopping 962 million by 2020. Maharashtra will be home to 9.3 percent of that number and will be an advantageous position with available ample human capital in a period of soaring demand in industries such as construction, retail, BFSI, IT & ITeS, manufacturing, among others.
Maharashtra is on a positive path where human capital meets employment opportunities, with plans in place to equip 45 million people with employable skills by 2022. Skill development will also command due focus with the creation of a healthy pool of jobs and talent to be a top priority. Maharashtra’s development will be centered on innovation, infrastructure, culture, tourism and sustainability and present unique prospects to craft an unparalleled success story in India, similar to Germany’s leading position in the EU.