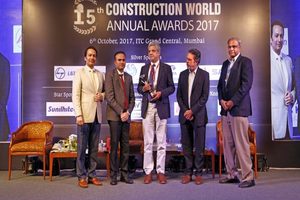 The 15th Annual Construction World Awards at ITC Grand Central, Parel, in Mumbai, was hosted by the Foundation of Infrastructure Research Studies Training (FIRST), where the names of India's Fastest Growing Construction Companies were unveiled at the grand award ceremony which was attended by well-known personalities from the construction world.

The award winners were felicitated and recognized at the event. India's fastest growing Construction Companies, country's Top Challengers and the construction Man of the Year took center stage and were applauded by the construction fraternity.
For the last 15 years, FIRST (Foundation of Infrastructure Research Studies Training), a non-profit body engaged in information and research, developed a statistical model to present and analyze India's Fastest Growing Construction Companies for the last 15 years.
Conceptualized and Initiated by Pratap Padode, President, and Founder of FIRST, the model uses financial data of the last six years, and companies are categorized and ranked under Large, Medium and Small.
"It’s an honor to host the 15th Annual Construction World Awards and present the category winners; L&T as the Largest Construction Company and Dilip Buildcon, India's Fastest Growing Construction Company. Our findings reveal that new entrants like GHV, Montecarlo, KNK among others are growing at an average rate of over 30 percent. Some of our Top Challengers are Afcons, Gayatri Projects, MEP Infra and Kalyani Steels. It is a matter of honor and pride to announce Elias George, MD, Kochi Metrorail Project as CW Man of the Year, Public Sector and - Sajjan Jindal, CMD, JSW as the CW Man of the Year for Private Sector. So, let's raise the toast to those who construct and build, what is now being referred to as the new incredible India," said Padode.
A seven-member jury panel, comprising eminent people from the construction industry, came together on September 6 this year to discuss, deliberate upon and select the winners of 'Man of the Year' along with  'India's Largest and Fastest Growing Construction Companies’.
'Man of the Year' is awarded to construction heroes who have made remarkable achievements this year and, through their efforts, have propelled the company, and industry forward.
FIRST created another model called 'Top Challengers'. This award takes into consideration promising companies, having studied their ability to grow over the previous year despite challenging circumstances. Companies under this category including building materials, infrastructure developers, and construction equipment were also awarded.