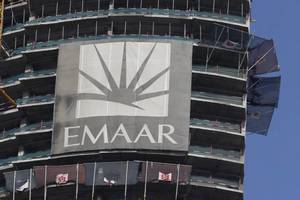 Emaar India is about to launch six projects, with an estimated investment of Rs 1,200 crore as it sees demand reviving for ready-to-move-in properties.

Emaar India has been focusing on execution of ongoing projects after it decided in April last year to end a joint venture with MGF.
"We are seeing a lot of traction for ready-to-move-in units and those nearing completion. So, in the next six months we have decided to launch six projects comprising of 1,600 units," Emaar India CEO Sanjay Malhotra told PTI.
The company will launch one commercial project and five housing projects in Gurugram.
Sources claim that the total cost of development of these six projects could be around Rs 1,200 crore over the next four years.
Malhotra said the company got occupancy certificates for 2,600 units in last 15 months and has applied for another 3,000 units.
By 2018-19 Emaar India is targeting to deliver 11,000 units and has ramped up workforce at sites to around 16,000 laborers to complete existing projects.
The company is also launching sales center in Gurugram to showcase latest offerings to the customers and also extend various services.
Emaar India said it has recently become a signatory to the UN Global Compact, a global voluntary initiative by the United Nations to promote principled approach and value system of doing business.
Emaar India has about 50 ongoing projects in Gurugram, Jaipur, Lucknow, Mohali, and Chennai. The company has raised debt and engaged various construction companies to complete these projects.
In May, Malhotra had mentioned that the company has raised Rs 2,500 crore debt, of which about Rs 1,500 crore was used to replace costlier debt and rest on construction.
He had also said that Rs 2,000 crore would be invested over the next two years to complete all its ongoing 50 projects.