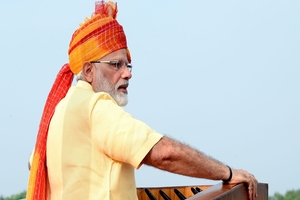 The promise made by India on Independence Day this year has been kept as they have issued medical visas for a one-year-old Pakistani seeking open heart surgery and a man seeking a liver transplant.

“We have approved the visa request for liver transplant surgery of your uncle Mr Azhar Hussain in India,” external affairs minister Sushma Swaraj tweeted in response to a request from a Pakistani national Abbas who describes himself as a liberal and a social activist on Twitter.
Swaraj had earlier announced medical visa for a one-year-old Pakistani girl.
“We are giving visa for the open heart surgery of your one-year-old daughter Shireen Shiraz in India,” she tweeted in response to a request from the child’s mother Hira Shiraz.
So far, five medical visas were issues by India for Pakistanis seeking urgent treatment.
On Independence Day, the external affairs ministry had announced that India would provide medical visas to all bona fide Pakistani patients.
As ties between the two countries increased over various issues, the ministry had announced that only a letter of recommendation by then Pakistani foreign affairs adviser Sartaj Aziz would allow a Pakistani national to get a medical visa for India.
Islamabad termed the action “highly regrettable” and added that asking for a letter from the Foreign Affairs Advisor violated diplomatic norms and such a requirement had not been prescribed for any other country.
However, on July 18, a patient from Pakistan-administered Kashmir, seeking treatment in New Delhi for liver tumour, got a visa.
Swaraj said that he needed no recommendation from the Pakistani government for a medical visa because the territory “is an integral part of India”.