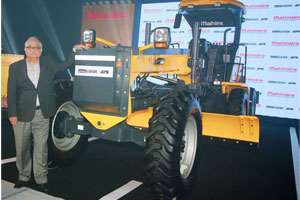 Mahindra RoadMaster G75 which is the Mumbai based companies first motor grader was rolled out recently.
" We already have orders for 50 motor graders as of now, We are targeting to sell around 200 units over the next one year. " M&M President Automotive Sector Rajan Wadhera told.
The motor grader has priced at Rs 34.99 lakh and around one-third of the cost of big ones being sold by other companies, he added.
After establishing the product in the market the company would introduce other products, Wadhera said.
The Chakan plant is manufacturing The RoadMaster G75, has been designed and developed after an in-depth understanding of the needs of the road contractor fraternity, he added.
"Our aim is to liberate them from the deployment of various sub-optimal methods with limited mechanization and thereby, improve their productivity," Wadhera said.
Vinod Sahay, CEO of M&M Truck and Bus Division and Construction Equipment Division said the motor grader is most suitable for constructing small to medium roads as well as the widening of state and national highways.
"It is also apt for applications such as embankment or earthwork for laying of railway tracks and leveling of large plots for industrial construction," he added. MSS ARD