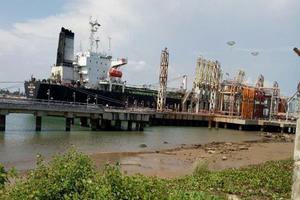 MT New Prosperity, a ship with a capacity to haul 2 million barrels of crude, left the US Gulf Coast on August 19 and arrived at Paradip port in Odisha.
The shipment is for the state-owned Indian Oil Corp (IOC), which “will process the crude at its refineries located at Paradip, Haldia, Barauni and Bongaigaon,” the company said in a statement.
The Bharat Petroleum Corp Ltd (BPCL) and Hindustan Petroleum Corp Ltd (HPCL) have also placed orders for about 3.95 million barrels of US crude for their Vizag and Kochi refineries.
Sunjay Sudhir, the oil ministry’s joint secretary (international cooperation), Katherine B Hadda, the US consul general in Hyderabad, senior officials of the foreign ministry and IOC were present at the welcome ceremony for the cargo.
He added crude oil import from the US by India’s largest refiner will go a long way in mitigating risks arising out of geo-political disruptions.
He said the new arrangement would bring in energy security and price stability for India, which is witnessing robust growth in demand for petroleum products.
“This is one of the first shipments by the US to India since 1975, and follows recent commitments to US oil purchases by BPCL and IOC,” a US embassy statement said.
The potential to boost bilateral trade by up to $2 billion is possible because of these imports.
Indian companies, both public and private, have also made a total investment of about US $5 billion in US shale gas assets. The first shipment of LNG is expected to reach India next January.
US President Donald Trump and Prime Minister Narendra Modi expanding bilateral energy cooperation through a strategic energy partnership during the Indian leader’s June visit to Washington.
The shipment of the crude is hailed as “a significant milestone in the growing partnership” between the US and India.
MaryKay Carlson, chargé d’affaires at the US embassy in New Delhi said “The US and India are elevating our cooperation in the field of energy, including plans for cleaner fossil fuels, renewables, nuclear, and cutting-edge storage and energy efficiency technologies.”