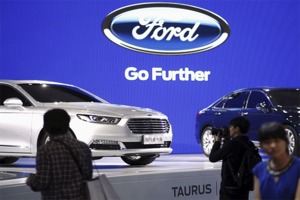 Domestic wholesales in September stood at 8,769 vehicles, as against 9,018 units a year ago, while exports were at 7,756 vehicles compared to 13,572 units last year.
“Our wholesales were impacted because of the new model launch planning along with ongoing constraints in the supply chain in September,” said Anurag Mehrotra, president & managing director, Ford India. “We believe by the fourth quarter these issues should be addressed which will help us move back into the growth trajectory.”
During September, Ford Motor Company and Mahindra Group agreed to explore a strategic alliance, designed to leverage the benefits of Ford’s global reach and expertise and Mahindra’s scale in India and successful operating model.
Driving discussions on the future of mobility, Ford also hosted the City of Tomorrow Symposium in September.
Involving thought leaders, academics,  opinion makers, academics, policymakers and TED fellows, the symposium reflects Ford’s long-term vision to help make people’s lives better by changing the way the world moves with world-class vehicles, mobility services and a wider range of transportation solutions. As part of this strategy, Ford has also signed a memorandum of understanding was signed by Ford with regards to the city of Indore and how they need to work together and address their most pressing transportation issues.