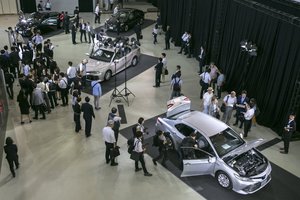 Hero MotoCorp's sales during September surpassed the "seven-lakh-sales-mark" which is the highest for any month. It dispatched 720,739 units last month from 674,961 units sold during the corresponding month of last year.
"With three weeks still remaining in the festival season, we have set an all-time record by selling over a million scooters and motorcycles in domestic retail sales in the festive period so far, further consolidating our market leadership," said Ashok Bhasin, Head of Sales, Marketing and Customer Care with Hero MotoCorp.
Similarly, Scooter India and Honda Motorcycle sales increased to 601,998 units from 568,753 units sold last September. The company's exports grew to 32,110 units while domestic sales stood at 569,888 units.
Automobile major M&M’s monthly sales increased by 16% in September. It sold 53,663 units, from an off-take of 46,130 units during the corresponding month of 2016.
Domestic sales of the company grew by 19 percent to 50,456 vehicles as against 42,545 vehicles sold during September 2016, whereas exports declined by 11 percent, with only 3,207 units shipped out during last month, down from 3,585 units sold abroad in September 2016.
"The auto industry has witnessed a sudden increase in demand in September leading up to the festive season. This upsurge has been witnessed both in rural and urban markets," said Rajan Wadhera, President, Automotive Sector, M&M.
The September sales of Ashok Leyland were up 28 percent to 15,370 units from 12,052 units sold during the corresponding month of last year.