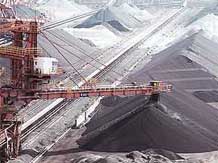 The commerce and industry ministry is soon going to move the Cabinet Committee on Economic Affairs (CCEA) over resumption of iron ore exports in order to augment foreign exchange reserves. The move has been prompted by an unprecedented depreciation in the rupee value.

The draft cabinet note, floated by the commerce department under ministry of commerce and industry, last month, did not receive positive response from the steel ministry, which sees any step towards resumption of iron ore exports adversely impacting the domestic steel industry. However, the commerce department is "confident" that the with a "considerable support" both from PMO and finance ministry the proposal will be taken up by this month and will also pass through, officials told Business Standard.

“The availability of ore to domestic industry is ensured through high export duty of 30% and higher railway freight on cargo. A large part of the iron ore mined is in the form of fines. Surplus fines, which are not agglomerated by the domestic industry for its use, are exported,” minister of state for commerce and industry D. Purandeswari said.

However, the steel industry is up in arms over the proposal. In a letter to Prime Minister Manmohan Singh, Sajjan Jindal of JSW Steel has said that the industry is facing severe shortage of iron ore in Karnataka due to a delay in restarting mines. “At this juncture, relaxing the export restrictions on iron ore would not be a step in the right direction.”

The mining industry is pushing for a reduction in the export duty on iron ore, while the steel ministry favours status quo on 30% export duty on the same.

FIMI secretary general RK Sharma said we have been asking the government to reduce the duty on export of iron ore.”We have written to finance ministry as well. The mining ban and high export duty is detrimental to the growth of our industry, which is a huge employment generator as well.”

In an earlier letter to finance ministry, Sharma had said the exit of the world's third largest iron ore exporter (India) has been perfectly timed for miners in other countries seeking alternatives for their growing supplies as appetite from top buyer China slows.

The production of iron ore has come down from 218 MT in 2008-09 to 140 MT in 2012-13 due to the enforcement of strict environmental and other regulatory measures. The steel industry says it is forced to import iron ore because of the drop in production levels.