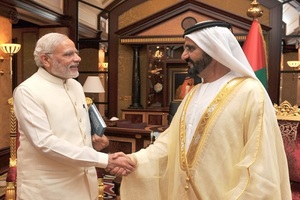 A two-day conclave will be held in Dubai, to discuss possible avenues for collaborations between India and Dubai and to discuss new ones.

The conclave will aim to maximize growth in sectors such as defense, energy, security and maritime trade, according to organizers.
The geo-political and economic  effect of good business relations between the two nations and the Asian continent,  will also be a topic of conversation at the meet, according one source from the UAE Strategic Conclave, as reported by the Economic Times of India.
India is one of the UAE’s top foreign partners and trade and commerce forms a critical part of the historically strong relations between the two nations, said one of the organizers.
Goods worth an estimated USD 30 billion were exported by India to the UAE in 2015-16, the main commodities being petroleum products, machinery, food and dairy produce.
The UAE has also been very welcoming to Indian businesses. 4,365 Indian companies have been registered with the UAE Ministry of Economy and 2.8 million Indians have been residing the country as of figures released in late 2016.
"At The Economic Times, we have closely evaluated the relationships between India and UAE and we strongly feel that this association will act as an important contributor to the economic progress of the region.
Hence, we have designed this conclave to discuss the potential areas of investment, collaborations and ways to further improve the business environment," said Deepak Lamba, president of Times Strategic Solutions.
Some big-hitters from the Indian corporate scene are expected to be in attendance at the conclave, including Harsh Mariwala, Chairman, Marico, Gautam Singhania, MD, Raymond, Ravi Khanna, CEO, Aditya Birla Solar and Rana Kapoor, Founder and CEO, YES Bank and Chairman, YES Global Institute.