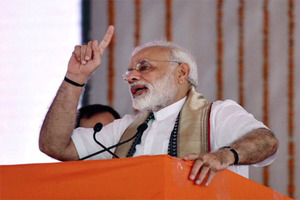 The ‘power for all’ scheme will be launched by Prime Minister Narendra Modi on September 25 to mark the birth anniversary of RSS ideologue Pandit Deendayal Upadhyaya. The objective of the scheme is to provide 24X7 electricity to all and the proposal was confirmed by power minister RK Singh yesterday.

“There is another test coming on September 25…when Mr. Modi will announce a big scheme for providing power for all 24X7,” Singh said at The India Power Conclave organized by Network18.

Singh didn’t reveal too many things about the scheme, he did mention that it is touted to cover all rural families after expected electrification of all villages by December end this year.
He added that the Narendra Modi led government has requested the states to prepare electrification projects which would be discussed and approved for release of funds under the scheme.
The scheme will be named ‘Saubhagya’ and provide subsidy on equipment like transformers, meters and wires. It was listed on the agenda of Cabinet meeting held earlier this week.
Finance Minister Arun Jaitley, talking about the scheme said, “Once we take a decision, we will tell you about that.” The government has been continuously working hard to electrify all of rural India and wants to achieve 24X7 power for all by 2019.
RK Singh while talking about the power sector had said that the government is trying to bring legislative changes for introducing stricter rules for enforcing power purchase agreements. The minister added that he has given a target of bidding out 20,000 MW of wind and 20,000 MW of solar energy projects by the year end.