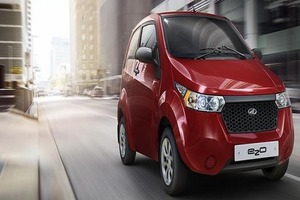 Indian auto-industry is going through a phase of continuous alteration. While it has been asked to upgrade to Bharat Stage VI (BS VI) by 2020, they have been prodded by the government to begin planning electric fleet.
Lithium-ion (Li-ion) batteries are suggested to be used for EVs as they can hold charge for a longer duration along with allowing frequent charging cycles. The battery, however, is sensitive to high temperature and is flammable.
The push towards EVs has raised questions about the cost of these cars which augments majorly based on the battery.
Li-ion batteries do not have a robust market in India right now, resulting in auto-makers depending on imports. This has made it hard for auto-makers to introduce electric fleet. However the market has great potential .
“Li-ion battery market is an upcoming market… It’s not there right now,” said Abhinav Gupta, manager, business development, SES Batteries.
He said that India can be looked as an “emerging market” for batteries with the government making an aggressive push towards EVs.
The Li-ion batteries’ market is expected to grow globally between 2013 and 2020 according to a research by Frost and Sullivan, a global research and consulting firm. It said that “automotive segment is slated to exhibit higher growth beyond 2015”.
Experts believe that government’s focus on the adoption of renewable energy by 2022 is another reason that will push the market ahead.
“Looking at Modi government’s plan of 175 GW of renewable energy by 2022, it is expected that accordingly the battery market will also grow to match the energy storage demand,” said R.Gopalan, associate director, Centre for Automotive Energy Material, an autonomous research and development centre.
He further said that government’s aim to begin EVs through two-wheelers will “exponentially increase the market of batteries”.
Centre plans to go all electric by 2030 even as it intends to float tender for e-rickshaws and e-scooters in November.
Two-wheelers constituted 80 percent of the entire automobile sales during 2015-16 as per data provided by Society of Indian Automobile Manufacturers (SIAM), while E-scooters were adopted more than 11 times by people against e-cars during 2016-17.
Lack of manufacturing site in India is considered as a major block in the minister’s ambition towards e-vehicular India.
Gopalan, however, said that “India is capable of making indigenous battery provided industries take an active part in procuring raw materials”.
By indigenous production of batteries, the cost can also be brought down significantly, one of the hindrances flagged by automakers.
“Battery cost could be reduced significantly by indigenisation of battery materials as it contributes more than 50 percent of the overall cost,” said Gopalan.
It has been projected that Li-ion batteries could see a global market worth more than Rs 200 crore for hybrid and electric cars by 2020. Gopalan said that India could see a growth in battery market at 16.5 percent CAGR till 2020.