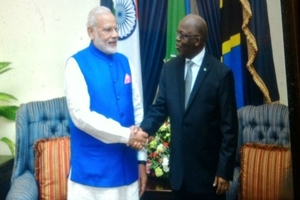 India has asked Tanzania to grant long-term visas for its companies with multi-entry facility to promote investments between the two countries, the commerce ministry said.

The Commerce and Industry Minister Nirmala Sitharaman led the Indian delegation and the Minister for Industry, Trade and Investment Charles John Mwijage represented the Tanzanian side.

The ministry said in a statement that a liberal visa regime facilitates growth of trade and investments between the countries.

“During the discussions, it was mentioned that long-term (at least one year visas) for reputed business companies with multi-entry facility will be helpful to promote investments and business collaboration between the two countries,” it added.

There is a need to increase cooperation in areas like gems and jewellery, energy, oil and natural gas, mining, transport, agriculture, capacity building and trade promotion were emphasized upon by both sides.

The Indian side pointed out the huge potential that exists in their country in sectors such as light oils, petroleum or bituminous minerals and vehicles.

Similarly, metals and minerals, dried cashew nuts in shells from Tanzania are required in India, it added.