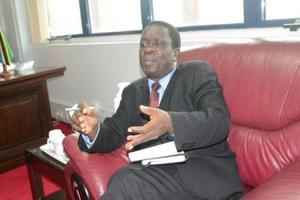 India and Tanzania partnered on several things in the past and continue to do the same today in the fields of Agriculture, the mining trade and the continued resistance against climate change.

The recent visit of Indian Prime Minister Mr. Modi to Tanzania has rejuvenated the relationship between the two nations, and the future only looks brighter. BW Business World conducted an exclusive interview with Trade and Industry Minister, Charles Mwijage on the subject.

He spoke splendidly about the history shared by the two nations and their forefathers, and even delves into his personal experiences to underline his affection for India. Mr. Mwijage expresses an admiration for the country’s heritage and hopes for a long and fruitful association.

When quizzed on improvements made on the previous year’s climate issues Mr. Mwijage revealed India’s role of leading them out from the front on the issue while also expanding on the good progress being made within Tanzania to curb further damage on local eco systems with government agencies put in place to solely handle the issue.

He was asked about India’s trade relations with the neighboring country Mozambique and if it poses a threat to Tanzania, Mr Mwijage dismisses the claim entirely, stating the pulse trade with India continues to go from strength to strength and reaffirming his confidence in one of Tanzania’s oldest and most diverse partners. He also did not shy away from conceding his preference for trading with India over China, when asked on the matter.

Mr. Mwijage continued by describing the size of the arranged investment. He disclosed a planned investment of 3 to 4 million US dollars, but anticipates at least a USD 10 billion dollar investment from India. He concluded with hopes of a lucrative and successful alliance between the two nations for the years that follow.