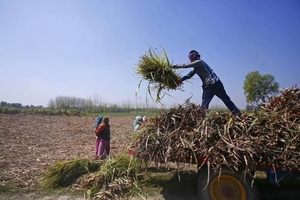 India’s agricultural and processed food products exports in the first four months of current fiscal rose by more than 6% to Rs 37,013 crore in comparison to a year ago period, indicating a possible revival in scenario.

Officials sources told FE that rise in rice exports mainly because of robust demand from Iran, country’s biggest destination for basmati rice and marginal fall in buffalo meat shipment after a sharp fall in first two month of current fiscal, helped overall exports of agricultural products from the country.

According to data from the Agricultural and Processed Food Products and Export Development Authority (Apeda), the shipment of basmati rice rose by more than 24% to Rs 10,126 crore during April-July 2017-18 while non-basmati rice export grew by about 10% to Rs 6,399 crore.
However, rice exporters say that the shipment may slow down a bit as Iran has put a temporary curb on imports as domestic crops are expected to enter the market shortly. “The realisation from basmati rice exports has improved in the current fiscal. Next couple of months we would get a clear picture on shipment trend,” Vijay Setia, President, All India Rice Exporters Association, told FE.
Iran, Saudi Arabia, United Arab Emirates and European Union are the key destination for India’s basmati rice shipment. From a record shipment of Rs 29,300 crore (3.7 million tonne) in FY14, the basmati rice exports have shrunk to Rs 21,604 crore (4 million tonne) in FY17 because of lower realisation attributed to higher outputs. After slowing down in first couple of months in current fiscal because of crackdown on illegal abattoirs in Uttar Pradesh, the buffalo meat exports was marginally down at Rs 7,326 crore in comparison to year ago period. In the first quarter of FY18, buffalo meat exports were Rs 5,473 crore, or slightly higher than the `5,445 crore in the same period last year.
However, in case of fruits and vegetables and groundnut, the exports in April-July (2017-18) have shrunk around 7% and 42%, respectively. “We expect fruits and vegetables exports to revive in the next few quarters of the current fiscal and overall we anticipate a higher shipment in comparison to last year,” said D K Singh, chairman, Apeda. India’s farm and processed foods exports had fallen to `1.08 lakh crore in FY17 against `1.31 lakh crore in FY15. Analysts say that in the current fiscal the exports could revive.
Former commerce minister Nirmala Sitharaman had last year stated that the primary reasons for the decline in agricultural exports include low commodity prices in the international market, shrinking global demand and high domestic prices, compared with the international prices. The problem was compounded by unfavourable currency rate movements compared with competing countries. Apeda monitors shipment of 22 commodities such as rice, wheat, buffalo meat, fruit and vegetables, pulses and other meat products.
The authority has been focusing on 20-odd clusters located for sustaining growth in the country’s food products’ exports.
These include basmati rice (Haryana and Punjab), buffalo meat (western Uttar Pradesh), grape and wine (Nashik region, Maharashtra), pomegranate (Satara and Pune regions of Maharashtra), dehydrated onions and garlic (Gujarat), poultry or egg (Namakkal, Tamil Nadu) and mango pulp (Uttar Pradesh and Maharashtra).