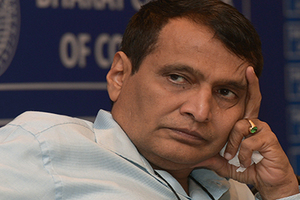 Suresh Prabhu may well have landed from the frying pan into the fire. Scalped for three train accidents within 10 days in August alone, Prabhu has been handed charge of the Commerce and Industry Ministry after helming Railways. This, at a time when export growth has slowed down considerably, industrial output remains weak and different government departments are sparring over India’s rank in the global ‘Ease of Doing Business’ pecking order. True, FDI inflows have seen a strong growth under Prabhu’s predecessor Nirmala Seetharaman, but she was also perceived to be too slow to forge new trade agreements with other countries.

Has Suresh Prabhu been demoted in being named a successor to Sithraman? He rubbished such talk, saying he looks at his new task as an opportunity to ensure rapid economic growth of the country. "I am extremely happy that the Prime Minister has asked me to do something in Make in India, Start up India, and ease of doing business in India---all of these are the flagship programmes of the government which have to be implemented and I look forward to doing that in the right earnest," he said.
Prabhu said he would ensure faster economic growth, address the challenge of creating more employment opportunities, work to bring in more investments and increase exports for greater competitiveness. He identified export intensive industries as an area where large number of jobs can be created. All good goals to have, but now, for a status check.
Exports:
In dollar terms, India’s exports grew 3.94 percent in July, an eight-month low. In rupee terms, there was de-growth of 0.32 percent. Analysts at brokerage IIFL said the exports were dented by a strong Indian rupee. During Q1FY17 (April-June) exports grew by a mere 1.2 percent, the slowest rate of growth in five quarters. The government’s own data show merchandise export growth was just 5.44 percent last fiscal, albeit on the back of a significant de-growth in 2015-16. The niggling issues in exports remain much the same: inability of the government to incentivise export growth in labour intensive sectors like apparel – despite thousands of crores promised in sector-specific packages.
Neighbours like Bangladesh are surging ahead in apparel exports but India continues to under exploit its potential. Analysts at CARE Ratings felt while the exports have grown to a certain extent following the pick-up in the global demand, the imports have also gone up between April-July this year due to increasing oil prices. They have predicted a pickup in industrial growth on higher government spending in the second half of the current fiscal and export growth of 8-10 percent in 2017-18. But they echoed the sentiments expressed by other sector experts on strengthening rupee and its negative impact on exports. Exporting industries and the IT sector would be particularly affected by this currency movement. To boost exports and improve India’s trade balance, Prabhu needs to adopt a comprehensive approach, tackling sector specific-issues and promoting exports specifically from labour intensive sectors.
IIP:
Industrial output, measured as the Index of Industrial Production (IIP) growth, contracted at 0.1 percent in June 2017 as against 8 percent growth in June 2016. On a cumulative basis, IIP grew 2 percent in FY18 (Apr-Jun) compared with a growth of 7.1 percent in the corresponding period in FY17. Industrial output picked up in July at 2.4 percent but only modestly over June. “Half of the eight constituents recorded a year on year contraction in July 2017, namely, refinery products, crude oil, cement and fertilisers.... The early indicators for industrial production in July offer mixed trends, with the sharp improvement in year on year expansion of automobile production and modest rise in core sector growth, juxtaposed with the slowdown in growth of non-oil merchandise exports and the sub-50 PMI reading. Given the favourable base effect and the rebuilding of domestic inventories post-GST, we expect the IIP to revert to a year on year rise in July 2017, although the pace of growth may be subdued relative to the 5.2 percent recorded in July 2016,” analysts at ratings agency ICRA said.
This article talks of the government wanting to overhaul its industrial and manufacturing policies this month, following slow factory growth even after the Make in India initiative. It said several ministries are working in tandem to create a large number of inter-locked policies to encourage new factories that will come up in mega industrial zones, similar to the ones in China. Well, Prabhu will have his task cut out in devising such all-encompassing policies to spur industrial growth and catalyse manufacturing.
Ease of doing business
Is it easier to do business in India now, under the Modi government, than it was earlier? The prime minister took a vow, soon after assuming office, to put India in the 50th spot in the World Bank’s Ease of Doing Business ranking in three years. In the Doing Business Report 2017, released in August 2016, India was still at 130. The government did kick off competition among states on the EoDB parameters with a ranking system just like that of the World Bank's but things haven’t improved any significantly. Though all state governments boast about a single window for various clearances, a recent report by the NITI Aayog found only 20 percent or just one in five companies surveyed use this system; two-thirds do not. On the claim about facilitating companies’ incorporation in less than a week, the survey showed that even in the best performing state, Tamil Nadu, it takes 63 days. The average time taken across the country is 118 days. This EoDB is one area where a lot will have to be done by the incoming minister.
Clearly, Prabhu's job is going to be tough. His stellar credentials as a man of business and finance might perhaps smoothen the ride this time round.