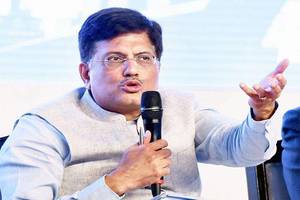 The government has named former bureaucrat Raj Kumar Singh as Minister of State (Independent Charge) of the ministry of power and new and renewable energy following the cabinet reshuffle on Sunday.

Former Power Minister Piyush Goyal, who has been elevated to cabinet rank and named as the new minister of railways, will retain the ministry of coal while Haribhai Pratibhai Choudhary has been named as Minister of State for coal. Former Steel Minister Narendra Singh Tomar has been given the additional charge of the ministry of mines.
Singh was among the nine new faces which were inducted in the Cabinet as Ministers of State, including Ashwini Kumar Choubey, Virendra Kumar, Gajendra Singh Shekhawat, Anant Kumar Hegde, Satyapal Singh, Shiv Pratap Shukla, Alphons Kannanthanam and Hardeep Singh Puri. Also, Dharmendra Pradhan, Piyush Goyal, Nirmala Sitharaman and Mukhtar Abbas Naqvi, were promoted to the Cabinet rank.
Singh is a Member of Parliament since May 2014. He is a 1975 batch Bihar cadre Indian Administrative Service (IAS) officer and former Home Secretary of India.
Minister of petroleum and natural gas Dharmendra Pradhan who was also elevated to cabinet rank has also been given the additional charge of ministry of skill development and entrepreneurship.