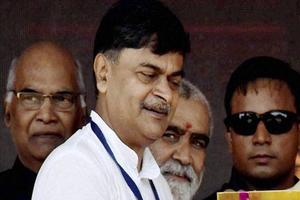 Newly-inducted power, new and renewable energy minister Raj Kumar Singh on Sunday said his ministry will attain its objectives on time and said he was certain to come up to the expectations of his leader.

“We have objectives. The ministry will attain its objectives on time. We have to electrify (the unelectrified villages) within a set time frame,” Singh said hours after taking oath of office and secrecy as Union minister of state (independent charge) at the Rashtrapati Bhavan in New Delhi.
Pointing to his extensive administrative experience, during which he faced many challenges, the 1975-batch Indian Administrative Service officer said: “I have worked as a public servant at different places. I have handled law and order in Bihar. All these things have filled me with confidence to attain my goals. I am quit certain that I will live up to the expectations.”
Asked if he was expecting a ministerial berth in Sunday’s reshuffle, the former Union home secretary said: “Whether I was expecting to become a minister? No. Whether I was expecting this portfolio? No. Both came as surprises.”
Hailing the newly-inducted railways minister Piyush Goyal who earlier handled the portfolio, Singh said he (Singh) will be in an advantageous position because his predecessor was “good” and that his task would be much easier and organised thereof.
A Lok Sabha member from Arrah in Bihar, Singh, 64, was among four former bureaucrats who were sworn in as Union Ministers in the Cabinet reshuffle.