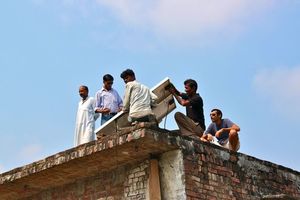 If the Central government’s plan of providing 24X7 power to all households by 2022 is to fructify, the challenge of improving the country’s transmission and distribution network to accommodate the potential surge in electricity demand would need to be dealt with head-on. For, India’s power generation capacity of 330 GW is not an issue for now – the peak demand is 160-180 GW at present. It is this that has brought smart grid solutions to the centre of policy decisions of late.

Experts say digitisation of the network is a must for a sustainable electricity chain in the 21st century. Simply put, a smart grid allows transmission and distribution assets like towers, switches, and transformers to be managed from anywhere within the network. Even the end-consumer gets connected with the larger grid through a smart meter — smart grids also ensure better understanding of domestic electricity consumption patterns.
According to a source in the power ministry, “digitisation and smart grids would be a major way to curb electricity theft, and in turn, bring down AT&C loss levels. Presently, about 27,000 feeder meters are already in the digital network, among the 31,000 installed under the Restructured Accelerated Power Development and Reforms Programme (R-APDRP).”
According to a survey by research firm IDC, 64% of utility companies consider digitisation of processes as one of the biggest drivers for a transformation in their functioning. In order to deal with the overwhelming data volumes this would necessitate, more than 50% of utilities are conducting pilot projects.
The total estimated cost of the National Smart Grid Mission (NSGM) from FY12-FY17 was Rs 980 crore, of which Rs 890 crore was earmarked for digitisation of the grid in smart cities. Additionally, smart grid pilot projects are being set up across the country (see chart). State-owned Power Grid Corporation of India has developed a smart grid pilot project at Puducherry and is the main consultant agency for projects in seven other states.
Corporate houses, both domestic and global, are also expected to help expedite the digitisation process. Schneider Electric has come up with a platform that enables collection and analysis of data on power consumption patterns and potential grid failures. Patna used this platform in its SCADA (Supervisory Control and Data Acquisition) network, with several benefits. Tata Power Delhi Distribution,  which distributes electricity in Delhi, found energy consumption falling to 1,000-1,500 units from 2,750-5,000 units in pilot home-automation projects. Swiss utility giant ABB is set to equip 20 substations in Himachal Pradesh with the latest control and protection technology to enable future digitisation.
Kameswara Rao, partner, PwC, offers a word of caution though, saying “smart grids have to be accompanied by other reforms in discoms, such as improved commercial processes and organisational capacity to speedily remedy identified hotspots. Investment in the hardware alone will be wasted money as it’s not easy for state-owned discoms to deliver good returns on their smart grid investments. Private franchisees are more adept at using its broader capabilities.”
Under the Ujwal Discom Assurance Yojana (Uday) scheme, 1.75 crore smart meters are to be installed across 22 states for domestic consumers using 200-500 units a month. So far, only a little over 1.5 lakh smart meters have been set up. For consumers with more than 500 units of usage, 1.34 lakh smart meters have been installed, as against a target of 50 lakh. The Energy Efficiency Services Ltd (EESL), under the power ministry, recently invited bids to procure 50 lakh smart meters for smart grid projects in Haryana and Uttar Pradesh.