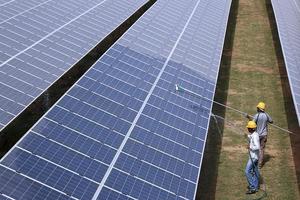 As the share of renewable energy is increasing by leaps and bounds in the power basket, with better and cheaper generation technologies, grid management becomes crucial due to the intermittent nature of such energy and micro grids may be the answer to some of the challenges in power evacuation.

Experts in this field expressed their opinion at a session on grid integration and micro grids with reference to renewable energy here on Saturday, the concluding day of the two-day seminar organised by the Confederation of Indian Industry on 'Energising South India'.
K Venugopal, the Co-Chairman of the Power and Renewable Energy Committee of the CII, South, said power evacuation was the real challenge in renewable energy and advanced micro grid systems would have to be developed and refined to suit the needs of the sector.
Abhilash Nair of ABB India Ltd said a micro grid can broadly be defined as "a smart system with the features of generation, energy storage and uninterrupted supply''.
His company is manufacturing solar inverters and other storage devices, and it would also supply micro grid systems. It would offer a range of technical solutions for better grid integration.
N S M Rao of Suzlon Group spoke of developing hybrid evacuation systems for solar and wind energy and said his company has developed grid-friendly wind energy turbines.
Suman Kumar, Senior Vice-President of Commercial Greenko Group, said big solar power projects could be built even though grid integration would be more challenging. His company has taken up such projects at the solar parks in Andhra Pradesh and Rajasthan. He also mooted a green energy corridor.
Harshitha S Kumar, business head of Solar Rooftop PV Systems, of the L&T group, said separate energy storage parks should be set up as part of green energy corridors.
Amitabh Singhal, General Manager of GE Energy Connections, said solar-diesel hybrid power solutions could be thought of for rural India to optimise the price of power.
B Ashok Reddy, President of Corporate Affairs, Infra Cyient Limited, said roof-top solar power generation would be the real game-changer.