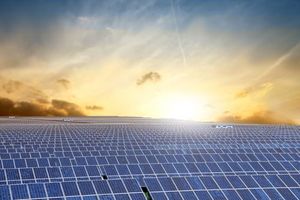 According to the data released by India’s Central Electricity Authority (CEA) and Ministry of New & Renewable Energy, an average of 1,914 megawatts of thermal power capacity was added in each of the four quarters between April 2016 and March 2017. This is barely more than half of the average 3,603 megawatts of renewable energy capacity added during each of those quarters.
The average wind and solar power capacity added during each of those quarters was 1,353 megawatts and 1,381 megawatts. And thus, solar actually beat wind power, which remains the largest contributing technology in India’s renewable energy sector with an overwhelming share of 56%.
The largest capacity addition, in thermal as well as renewable energy capacity, was seen in Q1 2017, which happened to be the last quarter of India’s 2016–2017 financial year and also marked the deadline for several crucial incentives for the power sector.
Renewable energy sector saw more than twice the capacity addition than thermal power sector in two consecutive quarters – Q4 2016 and Q1 2017. While in Q1 2017, the major contribution came from wind and solar power projects, biopower projects made a huge contribution in Q4 2016.
During these four quarters, 24,761 megawatts of power generation capacity were added to India’s grid. Coal contributed 6,990 megawatts, or 28%, while wind and solar each contributed 22%. Renewable energy together had a share of 58%. This is a significant milestone for the renewable energy sector in India, as coal constituted 59% of the total installed capacity in India at end of July 2017 — renewable energy is way behind at 18%.
The unprecedented growth in the renewable energy sector over the last few months was the result of several regulatory and policy initiatives by the Indian government. The central government and several state governments launched competitive auctions for several gigawatts of the solar power capacity and, recently, wind energy capacity. This created a healthy pipeline of projects which were commissioned in quick succession, reflected in the rapid ballooning of the installed capacity figures.
With the tariff bids for solar power projects falling to record lows in a very short period of time, there are concerns within the industry about the limit of this increasing competition. Additionally, regulators and utilities are now pushing for revision of higher solar power tariffs, which has resulted in increased anxiety and confusion among solar power developers.