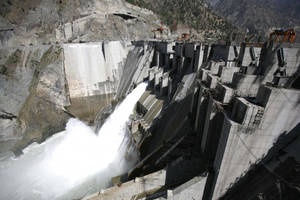 A Fitch Group Company BMI Research today revised upward the non-hydro renewable energy capacity in India to 155 GW from 130 GW by 2026 on the back of higher than expected solar installation and successful wind auctions.

"Higher than expected solar installation rates and the successful implementation of wind energy auctions in the country have led us to upwardly revise our renewable energy capacity forecasts for India," a BMI Research statement said.
It said, "We now expect non-hydro renewables capacity to total 155 GW in 2026, up from a previous forecast of 130 GW. We have long-highlighted the Indian renewables market as a global outperformer in terms of installed capacity and growth rates."
This view is underpinned by Prime Minister Narendra Modis strong support for renewable energy, including the ambitious targets adopted for sector growth and the policies implemented to encourage developers into the market, it said.
Positive developments in the renewables sector over the last six months, specifically in the wind and solar segments, have led us to upwardly revise our non-hydro renewables capacity forecasts, it said.
"We expect non-hydro renewables capacity to grow by an annual average of 12.7 per cent between 2017 and 2026, totalling 155 GW in 2026. This compares to our previous forecast of just under 130 GW by 2026," it added.
The progress registered with the auctions, as well as the record high levels of wind installations during 2016-2017 (5.4 GW of wind capacity was added) has led us to upwardly revise our wind power forecasts, it said.
The BMI Research expects wind capacity to total 35.5 GW by end 2017, up from its previous estimate of just over 31 GW. By 2026, it forecasts the Indian wind capacity to reach 68 GW, a revision from its previous forecast of nearly 54 GW.
It has revised its solar forecasts upwards, with solar capacity totalling 19.2 GW by end 2017 and 71.5 GW by 2026. This is from a previous 17 GW and 64.7 GW previously, over the same time period.
As mentioned, its forecasts remain below the government targets on account of the feasibility risks, but also due to transmission and distribution bottlenecks and land acquisition issues.