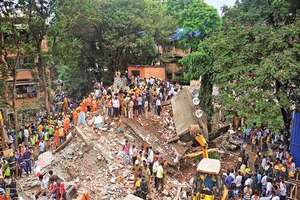 Forty days after the four-storey Sai Siddhi building at Ghatkopar crashed — killing 12 and injuring 16 persons — its reconstruction is caught in a whirlpool of confusion.

So far, leading construction company Man Infraconstruction is the sole developer to have come forward with an offer to carry out reconstruction of the building, free of cost, through its trust or CSR funding. However, the company has yet to submit its formal proposal to the Brihanmumbai Municipal Corporation (BMC). Reconstruction entails an investment of Rs 3 crore, and the developer will have to shell out at least Rs 1.50 crore to BMC towards various taxes, despite being a charity.
Man Infraconstruction has orally appealed to BMC to waive those taxes to make reconstruction viable as it isn't keen on opting for fungible floor space index (FSI) or transfer of development right (TDR) for the construction of additional flats to sell at market rate.
Realising that BMC has no powers to waive taxes for the reconstruction being done as charity, Man Infraconstruction, on August 13, sought the intervention of chief minister Devendra Fadnavis. However, the government is yet to take a call.
Further, of the 15 flats, four are owned by Sunil Shitap, currently in jail for allegedly carrying out unauthorised alterations on the ground floor of the Sai Siddhi building, which led to its collapse on July 26. Shitap's consent is yet to be received while the other 11 residents have given their nod for the proposed reconstruction offer by Man Infraconstruction.
Man Infraconstruction managing director and BJP corporator Prag Shah told DNA, "Our company has offered to reconstruct the building free of cost and hand over flats to the occupiers. So far, we have consent from 11 unit holders. We do not want to go in for fungible FSI or TDR as the objective is not to make money out of it. We want BMC to write off the taxes and have sought the CM's help in this regard.'' He said the company has already started preparation of the plan for construction of 10,000 sq ft of built up area and will seek necessary approvals from BMC.
BMC Commissioner Ajoy Menta said, " BMC is yet to receive a formal proposal from Man Infraconstruction. We will scrutinise it after its receipt.''
BJP legislator from Ghatkopar West Ram Kadam said that 11 unit owners will soon be shifted to the transit camp in Bhandup area. "As far as the reconstruction is concerned, it is still in the discussion stage,'' he noted.