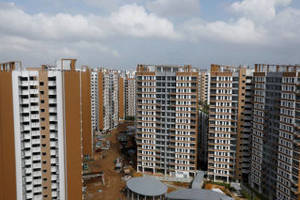 After the Smart City Challenge, the government is now planning an India Housing Construction Technology Challenge in 2018 to select the most cost-effective technology to speed up construction of affordable housing and meet the target of building 1.2 lakh houses by 2022.

The ministry of housing and urban affairs (MoHUA)  has proposed to adopt the competition route to bring in the desired technology from across the globe involving all stakeholders like Central/state governments, academic institutions, private sector, technology certification and standardization agencies and professional organisations.
“We will conduct a challenge for the construction sector in the next 18 months. Global firms will be invited to India to demonstrate construction techniques for  housing that are affordable and take minimum time – as less as three months instead of the conventional three years for construction," Housing and Urban Affairs Secretary D S Mishra said at a round-table meeting here on the India Housing Construction Technology Challenge (IHCTC) organised by the ministry of housing and urban affairs.
“Use of technology in construction will help save working capital. The government may even consider incentives for states that embrace new technology in construction,” he said.
Mishra also said that the techniques showcased by those who win the competition will be adopted in the upcoming housing projects of the government.
The roundtable focused on aspects like rollout of the housing challenge, branding¸ promotion, awareness creation, financing the challenge, defining role of stakeholders, criteria for technical evaluation for selecting technologies, awards and incentives, B2B discussions and signing of MoUs, institutionalisation and adoption of selected technologies by Central and State governments etc.
Around 200 delegates from state governments, major construction companies/portals, real estate agencies- representatives of NAREDCO and CREDAI, private sector developers and academic institutions participated.
Addressing the event, Niti Aayog CEO Amitabh Kant pitched for the use of technology in the affordable housing sector to speed up construction. "You cannot do affordable housing if you are constructing them in three years. The rate of interest is so high that it will never be affordable. Affordable houses need to be constructed in 3-4 months and that is possible with the help of technology," he said.
Stating that the pace of urbanisation will be higher in the next 4-5 decades in India than seen in the last 5,000 years, Kant advocated "innovative and sustainable urbanisation" as the country faces various challenges such as scarcity of land, gas and water.
"We need to have extremely sustainable and innovative urbanisation which should become the model for the rest of the world...there are two challenges -- how do we use technology and compress the speed of construction," he said
Till date, the government has sanctioned about 26 lakh houses, grounded 11 lakh units and completed three lakh units. The aim is to achieve the target of about constructing 1.2 lakh affordable homes (as against 1.8 lakh earlier) by 2022. The main challenge is to make states adopt new technologies.
National Buildings Construction Corporation, the government’s construction arm, has been given the task to provide a working model for construction technologies to the states. NBCC would handhold the state governments in the initial Housing Challenge. According to sources, the ministry has identified 25 cities where the model can be rolled out on a pilot basis.
“We are still in the era of brick and mortar construction. We have adopted a few new technologies such as 3D printing technology in construction. We are importing this technology from companies in Russia, China and Dubai. All our new projects will be constructed using the 16 new technologies that have already been approved,” said Anoop Kumar Mittal, CMD, NBCC, adding the use of new technology in construction is likely to bring down costs by 20 per cent to 25 per cent.
“The state government machinery is not equipped to adapt these technologies. We will be showcasing some pilot projects for them to accept it,” he added.