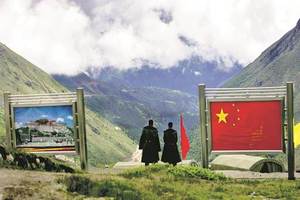 When Prime Minister Narendra Modi’s government approved $256 million to upgrade a section of a remote border road last month, few took notice. Yet India’s decision to revive plans for the trilateral highway, part of an ambitious 1,360-kilometer (845 mile) crossing to link northeastern India with markets in Thailand and beyond, marks the next phase in the jostle between New Delhi and Beijing for economic and strategic influence in the region.

In the last two years alone, India has assigned more than $4.7 billion in contracts for the development of its border roads, according to government figures, including the highway which will run from Moreh in Manipur through Tamu in Myanmar to Mae-Sot in Thailand.

The construction has taken on new urgency as China pushes ahead with its own vast ‘One Belt, One Road’ infrastructure initiative, expected to involve investments worth more than half a trillion dollars across 62 nations. The intercontinental web of road, rail and trade links has raised concerns among strategic rivals India, Russia, the US and Japan.

Among the biggest showcases of the plan — an economic corridor that runs through the Pakistan-administered part of disputed Kashmir, which both India and Pakistan claim — has unsettled equations in the South Asian neighborhood, where border tensions often simmer.

“With China’s growing interest in the region, as its wealth grows, its influence is growing beyond its borders,’’ said K. Yhome, New Delhi-based senior fellow at the Observer Research Foundation. So while China is pushing for a north-south economic corridor under the ‘One Belt, One Road’ initiative, India is aiming to build links with its eastern neighbors, he said.
Neglected Infrastructure
Under the Modi government’s ‘Act East’ policy, India is investing in road and rail links on its north-east borders, where it rubs shoulders with Nepal, Bhutan, Bangladesh, China, and Myanmar. But the plan for the India-Myanmar-Thailand highway is not a new one. It’s been on the drawing board since 2001 when it was called the India-Myanmar Friendship Road, according to Vijay Chhibber, India’s former roads secretary.
New Delhi has now proposed to further extend the Myanmar-Thailand link to Cambodia, Laos and Vietnam, shortening travel from Mekong River to India using water transport, in its bid to bind it closer to the Association of South East Asian Nations and the Bay of Bengal Initiative for Multi-Sectoral Technical and Economic Cooperation, according to Chhibber.
The road link will be funded by the Asian Development Bank under the South Asian Subregional Economic Cooperation program. Involving India, Bangladesh, Bhutan, Maldives, Myanmar, Nepal and Sri Lanka, the program doubled investments on infrastructure to $6 billion since 2011 compared to $3.5 billion in previous decade, said Ronald Antonio Q. Butiong, Manila-based director at ADB’s Regional Cooperation and Operations Coordination Division.
New projects include the Kaladan multimodal transit transport project connecting India’s Mizoram state with ports in Kolkata and Myanmar’s Sittwe. India has financed the $120 million Sittwe port construction, according to SASEC. “Regional cooperation is a slow process and you have to have a lot of patience,” said Butiong by phone from Manila. “You couldn’t imagine this happening a few years ago. But now it looks like it’s becoming a reality.”
Weak Link
India chose not to attend President Xi Jinping’s two-day One Belt One Road summit in May. Three months later, the two nuclear-armed powers are managing a tense military standoff over junction between Bhutan, China’s Tibet and India’s Sikkim.
The Chinese government has repeatedly said its Belt and Road initiative aims to enhance regional connectivity, bringing economic benefits for China’s neighbors.
It urged New Delhi to shed “misgivings and doubts” about the project. Roads, bridges and railways have been a weak link in India’s infrastructure in the north eastern states. In part, it was left underdeveloped as strategy to make the region inaccessible to Chinese troops if Beijing ever tried to repeat the four-week 1962 border war and encroach into the territory India sees as its own.
This has also meant poor access for Indian businesses to markets of south-east Asia. Modi fast-tracked decades-old infrastructure plans such as opening the nation’s longest bridge spanning 9.2 km across the Brahmaputra river to ensure the smooth movement of troops to the northeastern state of Arunachal Pradesh, one of India’s most remote regions that is claimed in full by China. “For India to improve its influence, it needs to take some action otherwise it will be left behind,” said Rajiv Biswas, Singapore-based chief economist at IHS Markit. “If India wants to be part of growth dynamic of Asia it needs to develop infrastructure links and that is why this project is a very important first step.”
‘Sovereign Assets’
In a brand new office in the heart of India’s capital New Delhi, Sanjay Jaju is meeting contractors responsible for building roads in the country’s north eastern states for the National Highways & Infrastructure Development Corp.
The three-year-old state-owned company, where Jaju is finance director, is an unusual entity in the south Asian nation’s notoriously slow bureaucratic labyrinth. The highway through Myanmar and Thailand is among the $4.7-billion in contracts the company has assigned. In the meantime, the corporation is busy acquiring land for its projects. “We’re creating sovereign assets,” said Jaju. “Our international projects will take off this year.”