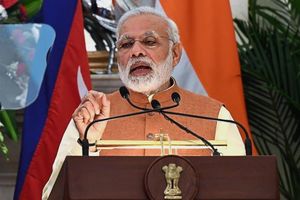 Larsen & Toubro Ltd., the nation’s largest engineering firm, has rallied 27 percent this year, beating the benchmark gauge which has risen 19 percent. Gayatri Projects Ltd. and KNR Constructions Ltd., which build roads, and Simplex Infrastructures Ltd. have also surged.
The outperformance may continue as the nation’s central bank rate cut of 200 basis points since December 2014 is helping companies better manage leverage, while new orders are expected to pick up pace in second half, brokerages including Macquarie Group Ltd. said.
And now that the June-quarter earnings season has concluded, bullish notes are trickling in.
Macquarie Capital Securities India analyzed results of 12 companies from the sector with combined revenues near that of Larsen & Toubro’s engineering and construction division. Their total revenue rose 12 percent after three quarters of no growth. Goldman Sachs India said first-quarter earnings suggest that there are "green shoots" for cement consumption driven by low-cost housing and infrastructure.
Larsen & Toubro, viewed as a bellwether for domestic economy, reported a 16 percent jump in revenue from its infrastructure segment, the most in five quarters. The growth was driven mainly by the local market, the company said.
Earnings “read across of the mid-cap EPC space supports our thesis of domestic capex revival," Macquarie’s analyst Inderjeet Singh Bhatia wrote in an Aug. 22 note. He has the equivalent of a buy rating on Larsen and NCC Ltd., a construction company.
Robust Orders
Order books have strengthened, thanks to construction of metro rails and buildings, and the analysts expect government agencies like the National Highway Authority of India to catch up with their target of building thousands of kilometers of roads after the monsoon season ends in September.
The government in February pledged a record 3.96 trillion rupees to build and modernize infrastructure. In the April-June period, it spent 683 billion rupees on building assets such as roads and power plants. This was about 22 percent of the budgeted full-year expenditure versus 20 percent for the year-ago period, official data show.
Company commentaries on the outlook continue to be very encouraging, Bhatia said. Outside of roads and metro, other sectors like irrigation and affordable housing have also started to show early signs of growth, he added.
Government spending is strong, and construction of low-cost homes and rural roads is likely to pick up in second half after a second year of near-normal monsoon, Goldman Sachs analyst Pulkit Patni wrote in a note on August 23. Suppliers to construction companies such as Kajaria Ceramics Ltd. and Dalmia Bharat Ltd., may also benefit. Goldman has a buy rating on the companies. Patni also likes UltraTech Cement because of strong earnings growth.