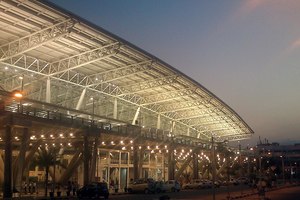 Senior officials at Patna airport said the firm has already completed preliminary survey of the airport and its officials are expected to visit the airport again on Monday.
"Executives of Meinhardt have made a preliminary survey of the airport, including the apron area, and they are now doing a civil survey of the terminal building and adjacent areas, over which it has to be expanded. Separate bidding process would be held for roping in firms for construction works," Patna airport director Rajendra Singh Lahauria told TOI.
Sources said the expansion work would commence with development of three additional aprons in front of the state hangar. AAI has already constructed temporary cabins adjacent to Bihar Flying Institute, in which maintenance equipment of state hangar would be kept. Two hangars are proposed to be developed adjacent to Bihar Flying Institute for operation of the aircraft of the civil aviation directorate.
"To start with, we would construct the existing apron in front of Bihar hangar apart from development of two more aprons. A new hangar would also be developed for the state hangar, following which the existing hangar would be demolished to pave way for expansion of the terminal building," Lahauria said.
As per the proposed plans, the first block of the new building would be developed over the existing location of the state hangar. After development of the new hangars, the existing state hangar would be demolished. Thereafter, the AAI would develop the first section of the new terminal building on that location.
Once the first section of the new terminal building is ready, passenger operations would be shifted to it and the existing terminal building would be completely demolished. Finally, the AAI would commence construction of the remaining portions of the new terminal building.
The extended terminal building would be two-storey structure with four aerobridges and parking bays for 20 aircraft, which would, in turn, facilitate night operations of flights from the city airport.
Airport director Lahauria said the work on extension of the terminal building would start from February next year and take two years to complete.
New Alliance Air flight: Alliance Air, a wholly owned subsidiary of Air India, started running a direct flight on Patna-Lucknow-Bhopal sector from Thursday. The flight will take off from Patna airport at 1:50pm and land at Lucknow at 3:30pm. Thereafter, it would take off from Lucknow airport at 4pm to land at Bhopal airport at 5:40pm.